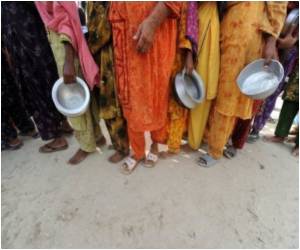 Major hunger crisis threatens Pakistan with an increasing number of malnourished children, warns Save the Children, the leading NGO for children.

"The number of malnourished and critically sick children will rise dramatically in October and November as the food crisis takes its toll," the Daily Star quoted the NGO's country director in Pakistan, Mohammed Qazilbash, as saying.

"These children have weakened immune system because of the shortage of food, making them very vulnerable to disease," he added.


According to UN statistics, over 12,000 children have become severely malnourished since heavy monsoon rains devastated large parts of the country in early August, but experts suggest that the true figure could be higher, as many vulnerable young survivors in remote areas might have missed the count.

Child deaths around the world could be cut dramatically for just 40 billion dollars a year, as babies often die from easily treatable diseases, a new report by Save the Children said Monday.
Advertisement
Around 21 million people have been affected by the floods, of which, approximately three million are under the age of five, according to Save the Children.

Senior officials from all over the world will meet United Nations secretary-general Ban Ki-moon in New York on Saturday to discuss the global response.

A-Z Drug Brands in India Blood - Sugar Chart Pregnancy Confirmation Calculator Sinopril (2mg) (Lacidipine) Turmeric Powder - Health Benefits, Uses & Side Effects Noscaphene (Noscapine) Daily Calorie Requirements Find a Doctor Blood Pressure Calculator The Essence of Yoga
This site uses cookies to deliver our services.By using our site, you acknowledge that you have read and understand our Cookie Policy, Privacy Policy, and our Terms of Use  Ok, Got it. Close
×