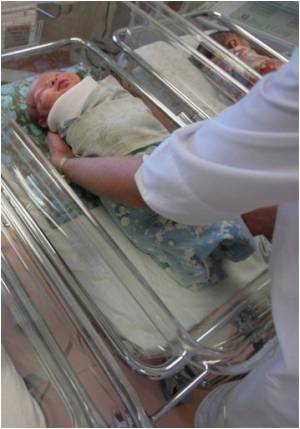 Babies who are born with low birth weight are at an increased risk of suffering from obesity later in their lives since their brain makes them to eat more due to fewer pathways for signaling fullness in the brain region that controls appetite.

The study, published in the latest issue of the journal Brain Research, was conducted by a group of American researchers who conducted the study on new born mice. They compared the brains of new born mice that had low birth weight with normal babies whose mothers had good access to food during their pregnancy.

The researchers found that the brains those mice who had low birth weight were "programmed" at the stem cell level to eat more food later in their lives and thereby increasing the risk of suffering from obesity.


"Obesity and its related diseases are the leading cause of death in our society, yet we have few effective strategies for prevention or treatment", lead researcher Dr Mina Desai said.

Over 1 billion people world-wide are obese thus affecting their health due to their nutrition and lifestyle. 3.9% of India's population is obese! Know more about obesity and its prevention.
Advertisement
<< Risk of Kidney Failure High in Depressed People
Dengue Fever Raises Its Ugly Head in Far North Queensland >>

Loram (2 mg) (Lorazepam) The Essence of Yoga Vent Forte (Theophylline) Blood Pressure Calculator Blood Donation - Recipients Accident and Trauma Care A-Z Drug Brands in India How to Reduce School Bag Weight - Simple Tips Daily Calorie Requirements Indian Medical Journals
This site uses cookies to deliver our services.By using our site, you acknowledge that you have read and understand our Cookie Policy, Privacy Policy, and our Terms of Use  Ok, Got it. Close
×