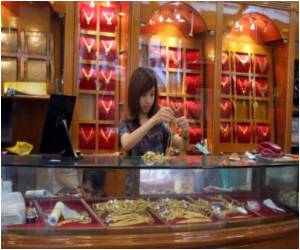 In the Central African Republic, almost everyone in the small town of Gaga is a clandestine gold miner, regardless of age or sex, but this risky livelihood may get them killed.

Swathes of the deeply poor, landlocked nation are roamed and sometimes controlled by armed groups who value gold more than they do human life and threaten artisanal mining communities, particularly if there are ethnic or religious differences.

At present, mainly Christian vigilantes trade in the gold and say they are protecting Gaga, but the village still reels from attacks late last year when hundreds of people were massacred first by Muslims, then by Christians bent on revenge.


"We quit school to dig for gold because it brings in a lot of money," 12-year-old Dieu Beni Gueret told AFP, looking up from a sandy pit by the town 200 kilometres (125 miles) northwest of the capital Bangui.
Advertisement
Gueret opened his bag to reveal nuggets of the precious metal, the envy of every armed group in the region, and a few CFA franc notes he proudly called "the fruit of what we do every day".

Other children, as well as grown men and women, some with babies strapped to their backs, were digging away. When the holes are deep enough to fill up with water from a stream a hundred paces distant, they carefully sift the sand in hope of finding the pebbles that shine brighter than most.

"We don't have any machine. We work with spades and the younger ones dig deep down in the ground for a month or two before we can scrape in the soil to search," said Socrate, a man in his 40s who runs the artisanal mining efforts at Gaga.

When luck favours the miners, who number almost 2,000, a single hole can provide up to 20 grammes (0.7 ounces) of gold per day, Socrates added.

"The gold we seek is to improve our quality of life," said Daniel Aristide Dedanga, another miner. The CAR has considerable potential gold reserves, as well as diamonds and oil, but in decades of misrule or conflict, they have barely been developed industrially.

Socrate said that "we've never been able to work well" since mainly Muslim rebels of the Seleka alliance seized power in Bangui in March 2013 and held sway for 10 months. "While we're working, people come to shoot at us and we're forced to flee into the bush."

Mostly Christian forces known as "anti-balaka", who emerged as vigilante groups to seek vengeance for brutal atrocities against civilians by rogue Seleka forces, today control Gaga and the mine.

The self-styled "Colonel Cyriaque", who leads the local anti-balaka fighters, makes frequent trips between the village and the mine, always accompanied by three "lieutenants".

Cyriaque told AFP that he is there "to watch over the labourers". The village lies in one of the regions hardest hit by conflict, and those with weapons crave gold to fund their activities and to enrich their leadership.

When former Seleka rebels raided the community in a quest for gold in September last year, they massacred more than 200 villagers and razed hundreds of homes.

"We collected at least 213 bodies, some of which had been burned alive," said Ines Mokotemapa, a volunteer worker for the Central African Red Cross based in Yaloke, 45 kilometres from Gaga.

"More than 400 houses were burned down," Mokotemapa added.

Anti-balaka fighters took a terrible revenge. The Christian vigilantes launched an offensive on Gaga in December. They not only hunted down and chased out the ex-Seleka forces, but also slaughtered dozens of Muslim civilians.

The violence has deeply scarred the community, including evident physical traces. Many houses are still in ruins and whole families are crammed together in makeshift tents.

"The Seleka came to kill many people and burn almost all the houses in their search for gold," Cyriaque said. "When we ran them out, we decided to protect the sector. You never know."

Today, his anti-balaka forces act as go-betweens in the gold trade, buying the coveted mineral from the people of Gaga and selling it to buyers brave enough to come from Bangui and run the gauntlet of former rebels, vigilantes and bandits.

Surgeons Remove Gold Bars from Indian Businessman's Stomach
In a bizarre incident, surgeons have removed twelve bars of gold from the stomach of a businessman ....

Gold Compounds Which are Caffeine-based Could Help Fight Against Cancer
Caffeine has been known for its harmful side effects like restlessness, increased heart rate, ......

Authorities in Surat Create Diamond-Studded Miniature Taj Mahal
In Surat, authorities have made and put on exhibit a magnificent miniature replica of the iconic ......