Longstanding Conflict Has a Negative Impact on Empathy for Others 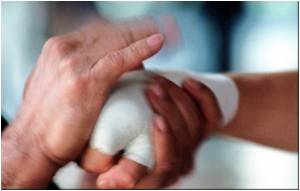 Researchers are on the quest of knowing the reason behind lack of empathy among members of opposing conflict groups.

MIT postdoc Emile Bruneau and associate professor of cognitive neuroscience Rebecca Saxe are also trying to locate patterns of brain activity that correlate with empathy, in hopes of eventually using such measures to determine how well people respond to reconciliation programs aimed at boosting empathy between groups in conflict.

After suffering through an ordeal of miscarriage last year, Kelly Brook believes that she has become a shoulder to cry on for women
Advertisement

"What are the psychological barriers that are put up between us in these contexts of intergroup conflict, and then, critically, what can we do to get past them?" Bruneau asked.


"We're interested in how people think about their enemies, and whether there are brain measures that are reliable readouts of that," said Saxe, who is an associate member of MIT's McGovern Institute for Brain Research.

For children to develop better social behavior, their mothers must have high levels of empathy, new study says.
Advertisement
"This is a huge vision, of which we are at the very beginning."

Before researchers can use tools such as magnetic resonance imaging (MRI) to evaluate whether conflict-resolution programs are having any effect, they need to identify brain regions that respond to other people's emotional suffering.

In a previous study, Saxe and Bruneau scanned people's brains as they read stories in which the protagonist experienced either physical or emotional pain. The brain regions that responded uniquely to emotional suffering overlapped with areas known to be involved in the ability to perceive what another person is thinking or feeling.

Hoping to see a correlation between empathy levels and amount of activity in those brain regions, the researchers then recruited Israelis and Arabs for a study in which subjects read stories about the suffering of members of their own groups or that of conflict-group members.

As expected, Israelis and Arabs reported feeling much more compassion in response to the suffering of their own group members than that of members of the conflict group.

However, the brain scans revealed something surprising: Brain activity in the areas that respond to emotional pain was identical when reading about suffering by one's own group or the conflict group.

Also, those activity levels were lower when Arabs or Israelis read about the suffering of South Americans, even though Arabs and Israelis expressed more compassion for South Americans' suffering than for that of the conflict group.

The latest findings suggest that those brain regions are sensitive to the importance of the opposing group, not whether or not you like them.

Joan Chiao, an assistant professor of psychology at Northwestern University, said that those brain regions may be acting as a "thermometer" for conflict.

"It's a really fascinating study because it's the first to examine the neural basis of people's behavior in longstanding conflicts, as opposed to groups that are distant and don't have a long history of intergroup strife," said Chiao, who was not involved in the research.

However, because the study did not reveal any correlation between the expression of empathy and the amount of brain activity, more study is needed before MRI can be used as a reliable measure of empathy levels, Saxe said.

The study has been published in Philosophical Transactions of the Royal Society: Biological Sciences.

Study Reveals How the Brain Generates Empathy for Someone Else's Pain

The way the brain generates empathy, even for those who differ physically from themselves has been mapped in a new study.
Advertisement
<< US Hospitality Industry Discriminate Against People With Di...
Experts Warn Against Home Delivery Botox Services >>

Drug Side Effects Calculator Find a Doctor Blood Pressure Calculator Blood - Sugar Chart Diaphragmatic Hernia Vent Forte (Theophylline) Iron Intake Calculator Loram (2 mg) (Lorazepam) Find a Hospital Daily Calorie Requirements
This site uses cookies to deliver our services. By using our site, you acknowledge that you have read and understand our Cookie Policy, Privacy Policy, and our Terms of Use