Less Fatty 'Satisfries' Added to Burger King Menu in US 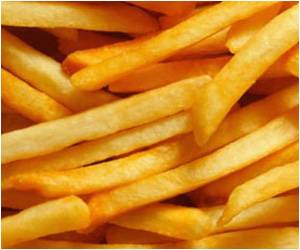 Customers can now order a side of "Satisfries" with their meal after fast food giant Burger King introduced a lower-fat, fewer-calorie french fry to US patrons on Tuesday.

The new fry, which is being sold alongside the old classic, has one-third the fat and 20 percent fewer calories.

And a small-size order contains only 270 calories compared to 340 calories in the original.


According to the company, the secret behind the Satisfry is a reduction in the potato's oil absorption while still keeping the product "crispy on the outside and fluffy on the inside."

Fast food, like fast life, will put us on the fast track to ill health. Teaching young children to make sensible dietary choices will ensure that they enjoy a 'slow', but safe future.
Advertisement
"We know our guests are hungry for options that are better for them, but don't want to compromise on taste," said Alex Macedo, president of Burger King North America.

Some 56 million orders are placed each month at Burger King, where one in two customers purchases fries, according to the company.

Not everyone is convinced of the fry's beneficial value, however.

"You don't want people to fool themselves and actually increase the serving size because they think it's healthier," dietician Mitzi Dulan told the newspaper USA today.

"French fries are an easy way to get a lot of calories and a lot of fat," she told the paper.

The fast-food industry is considered one of the major factors behind the obesity epidemic in the United States, where one in three adults and nearly one in five children is obese.

Burger King is the third-largest fast food enterprise in the world behind McDonald's and KFC.

Read along to find out more about the 7 shocking things that make up for your sandwiches, burgers and fries, that shouldn't be there.
Advertisement
<< Spain Healthcare Suffers 'Devastating' Cuts Raising Health R...
High Anxiety or Stress Rewires the Brain to Raise a Stink >>

Fighting Obesity While Sticking to Fast Food  Is It Possible?

Eating fast food is no longer a fashion. It is now a necessity. But fast-food is also known to contribute to the obesity epidemic. What is the way out then?
Advertisement
News A-Z
A B C D E F G H I J K L M N O P Q R S T U V W X Y Z
What's New on Medindia