Learn How to Beat Chocolate Addiction 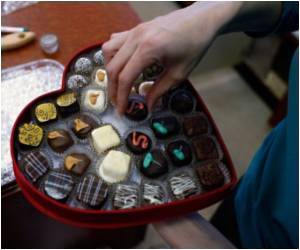 Addicted to chocolate and don't know how to beat it? A new study suggests the first thing you need to do is learn to acknowledge and accept the craving.

"If you stop fighting and ... accept something it loses its influence and power over your life," the Sydney Morning Herald quoted psychologist and CSIRO researcher Robyn Vast, as saying.

To test what drives our addiction to chocolate, Vast recruited 110 volunteers in Adelaide and divided them into three groups. Each group was given a bag of chocolate to carry around for a week, with the aim of resisting the goodies in the bag.

Vast said cravings are a little bit like an itch; they seemingly come from nowhere and demand our full attention when they occur.

"What I found was that if people accept craving for chocolate as human behaviour, just something that happens to them, then you take the fight out of it. It takes the pressure off," she said.

Also speaking at the seminar, Haigh chief chocolate taster Brendan Somerville explored another reason why we find chocolate so hard to resist: it simply tastes good.

"Flavour depends on where the cocoa has been grown, and whether it's been imported as a bean or in pre-made blocks," he said.

The findings were detailed at a RiAus seminar called Gluttony: The Lure of Chocolate.

The Essence of Yoga Drug Side Effects Calculator Noscaphene (Noscapine) Sanatogen Calculate Ideal Weight for Infants Turmeric Powder - Health Benefits, Uses & Side Effects Nutam (400mg) (Piracetam) Hearing Loss Calculator Drug - Food Interactions Loram (2 mg) (Lorazepam)
This site uses cookies to deliver our services. By using our site, you acknowledge that you have read and understand our Cookie Policy, Privacy Policy, and our Terms of Use