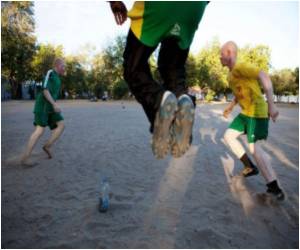 Scientists with the Industrial Research Limited, New Zealand, have demonstrated that laser light scattering techniques could be used to predict foot ulcers in diabetics.


In the '90s, the IRL team led by senior scientist Mike Andrews was able to develop a reliable way of sorting and grading timber, according to its quality, early in the production chain. They mapped the fibre type and orientation within wood - the key to predicting how timber will warp as it dries - by illuminating the fibres with a small laser spot and seeing how the light was scattered.

They then went on to investigate how IRL's growing ability with light scatter techniques could be used in other areas, including medical optical sensing.
Advertisement

One promising use for the technology is in skin imaging. IRL has developed a device which measures flow in the blood-rich dermis layer of skin just below the outer surface.


A football-mad German student working with the IRL team was the initial guinea pig. "We used laser speckle to measure the blood flow in his toes each morning, after he had played football at lunchtime and later in the day, and were able to identify what low- and high-flow levels look like."
Advertisement
The global rise in diabetes prompted the team to apply the technology to measuring areas of low blood flow in the feet of diabetics as a possible way of predicting where foot ulcers might occur.

IRL has found a way of equating the data gleaned from using laser speckle to a standard, widely understood, medical measurement. The technology is currently being trialled by Counties Manukau District Health Board.

Another equally promising application is predicting the onset of diabetes by looking for blood flow anomalies in the retina, which lines the back of the eye. Deterioration of the retina is one of the first signs of diabetes.

The IRL team has modified a fundus camera (a low power microscope with attached camera used to photograph the interior surface of the eye) to incorporate a laser beam which allows the blood vessels in the retina not only to be seen, but also shows blood cell movement and flow speed. "Our technology gives you a map of the flow in the blood vessels, whereas most other systems give you a point measurement, not a picture."

Dr Andrews says the project is still at the technical development stage, but is likely to attract keen interest from clinicians as very few methods of measuring blood flow in the back of the eye currently exist.

A number of other medical applications of the technology are being considered by the IRL team, including using laser speckle to assess burns. "It could provide a quick and easy way of assessing whether you are dealing with a third-degree burn which would need a skin graft."

The technology may also eventually be used to guide plastic surgeons who have to map blood vessels when taking skin from one part of the body and attaching it to another.