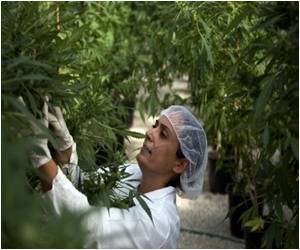 It resembles just any other American farmer's market. Buyers sniff the wares, test weights and compare, while vendors tout their product. But the only produce on offer is cannabis -- organic, of course.

"We have lollipops for $7, chocolate bars to help you relax for $13, and 'cosmic dust,'" said Bill Harrison, a seller who also stocks plain old smokable marijuana.

The Heritage Farmer's Market -- held over the July 4th long weekend -- was the first of its kind in Los Angeles. Despite the scorching sun, the line to get in stretched hundreds of yards (meters).


The crowd was diverse and multigenerational, interspersed with hippies, rockers, hipsters and some nondescript suburban types.

But they all have at least one thing in common -- they all have, as required for entry, a doctor's prescription.

In California, marijuana is only legal for medicinal purposes. For recreational use, possession of less than an ounce (28 grams) could result in a fine. Larger amounts can trigger criminal charges.

Edwynn Delgado knows the laws by heart: "for medical use, you are allowed up to four ounces at home, but I'd like to bring back home more today," he joked.

He has smoked pot since he was 11.

"In my neighborhood, there was a always a lot of weed around," the smiling 20-year-old said, wearing a baseball cap over his black hair.

He became a "legal" user at age 18, when he got a prescription to ease muscle aches.

Delgado waited for more than an hour at the stand that offers the best prices, at $180 per ounce, instead of $300 as charged in a regular dispensary.

Besides getting a good deal, Delgado prefers coming where he can count on quality product.

"Street dealers are dangerous because they put other stuff on it," he said.

"It's like in a regular farmer's market" said Adam Agathakis, one of the organizers of the weekend fair set to end Sunday.

"People come here to talk to growers, to check that it's grown without pesticides and that it doesn't have mold."

The bearded 35-year-old, in pleated pants and a striped shirt, has campaigned to "de-demonize" cannabis since his father died of cancer a decade ago.

"When he was dying, marijuana was the only thing alleviating the pain," Agathakis said.

Marijuana grower Terry Sand said that cannabis markets have sprouted elsewhere, including northern California and Washington state, but they weren't quite the same.

"They were more like conventions. Here it's special, because they are bringing growers and consumers together," Sand said.

The former elevator technician said he grew up amid cannabis and marijuana: "My parents were hippies, they were growing (marijuana) in their backyard."

But when a new technique emerged to help boost cannabis productivity in covered areas, Sand said he saw a "massive overwhelming opportunity."

Cancer patient Karen Flores, 50, said she smokes because "it helps me relax, it helps my nerves, it helps the pain I have."

She came to the market for good prices and quality. "It has to taste good, to smell good," Flores said.

But she doesn't like to light up in public. When she is away from home, she snacks on brownies, like those she just bought.

At Mathew Gerson's stand, a more unusual product is for sale: "it's a vaginal lubricant, it is coconut oil-infused," he said.

"With young women, it enhances sensations, and with menopausal women, it awakens their sexuality. And it helps them sleep."

Cheryl Shuman, head of a public relations firm, said she almost died of cancer in 2006, and credits marijuana for helping her pull through.

She joined the campaign to decriminalize marijuana, organizing the Beverly Hills Cannabis Club and becoming one of the leaders of Moms for Marijuana, an international group for women who support legalization.

One weighty argument in favor, Shuman emphasized, is the economic potential of the market, estimated around $47 billion for the US states where it's legal alone.