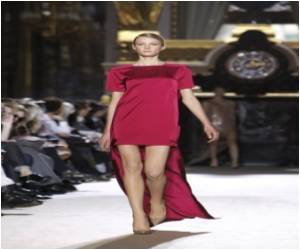 German fashion designer Karl Lagerfeld is in hot water after a French association that looks into the rights for curvy women filed an official complaint following his comments that people did not want to see plump models on catwalks.

The association -- called "Pretty, curvy, sexy and fine with it" -- filed the complaint at the prosecutor's office in the western city of Saintes, accusing the haute couture star of "defamatory and discriminatory comments", its president Betty Aubriere said.
Advertisement

The Chanel designer, who lost 42 kilos (93 pounds) more than a decade ago and wrote a book about it, has periodically criticised overweight people and lauded thinness.


"No one wants to see curvy women on the catwalk", he is cited as saying in the recently published book "The world according to Karl", which collates some of his most famous quotes.
Advertisement
He repeated this on television earlier this month, and said France's healthcare system was struggling partly because of "all the illnesses contracted by people who are too fat."

"It's the fat women sitting in front of televisions with their pack of crisps who say slim models are hideous", he was also quoted as saying in the book.

Lagerfeld's comments -- he once also said singer Adele was "a little too fat" -- have caused controversy and concern in an industry often criticised for employing wafer thin and unhealthy models.

Aubriere told AFP that famous people must stop coming out with these "insults."

"We're fed up. Many young girls are insecure and hearing such comments is terrible for them", said the head of the association, which was set up in January 2012 in Saintes.

"Today it's him who insults us and tomorrow who will it be?" Aubriere added, calling for a law to deal with discrimination against curvy people.

Aubriere pointed out that young, curvy girls who are the victim of insults from their classmates sometimes leave school altogether.

She added there needed to be an awareness campaign in schools "so that people understand that curves are often an illness or genetic, and not due to a poor diet."

Source: AFP
Advertisement
<< Buenos Aires Opens New School for Transvestites and Transse...
Results of Almost One in Three Large Clinical Trials Do Not... >>