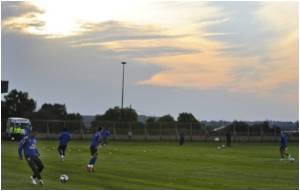 In a bizarre move, Italian soccer club Napoli has ordered the wives and girlfriends to keep the players happy as the Serie A season reaches a climax.

According to the Gazzetta dello Sport, with five matches remaining and Napoli in second place, the owner's wife invited the women to lunch at an expensive restaurant where they were issued with the stark instructions.

Each woman received a document detailing her obligations to her partner.


"Great players are such when they feel that way, especially in their heads; make sure your partner always manages to feel that way," the Courier Mail quoted the women as being told.

Divorce can be traumatic for children and create a sense of insecurity amongst them. Couples should realize that joined parenting is important even after divorce.
Advertisement
"We're counting on you for these last five matches of the season-avoid unnecessary family tension," the document, written in multiple languages to aid foreign wives, added.

Napoli trails leader AC Milan by six points, meaning it has little chance of finishing top of the pile come the season's end but is in a strong position to secure a lucrative spot in the Champions League.