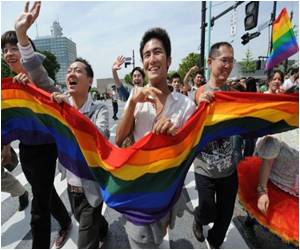 For a milestone 10th anniversary Gay Pride parade, thousands marched in central Jerusalem. They passed by the spot where an ultra-Orthodox Jew stabbed three participants in 2005.

Some carried rainbow banners and others had signs proclaiming: "A decade of marching in Jerusalem," and: "Love thy neighbour."

Opposition to such events is fiercer in Jerusalem, where religious feelings can run high, than in the more laid-back seaside city of Tel Aviv, but police were out in force to keep the peace.

The Pentagon has confirmed that it will allow uniformed military personnel to take part in this weekend's gay pride parade.
Advertisement
"We'll do everything to make sure that the event takes place as planned with no incidents."

Participants mostly shunned the skimpy, gender-bending costumes common on the annual Tel Aviv parade and the march was routed away from predominantly ultra-Orthodox neighbourhoods where opponents were holding a protest rally.