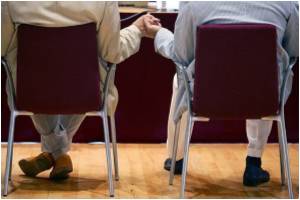 In what is seen as a major milestone in fight against gay discrimination, the Pentagon has confirmed that it will allow uniformed military personnel to take part in this weekend's gay pride parade.

Deputy Assistant Secretary of Defense Rene Bardorf said in an internal memo Thursday that soldiers could march in an individual capacity in the San Diego Pride Parade in California on Saturday.

Gay Ban Reaffirmed by US Boy Scouts After Secret Review

Following a secret review, the Boy Scouts of America have reaffirmed a ban on openly gay members and leaders.
Advertisement

Soldiers are prohibited from taking part in parades that further political activities or commercial interests, and must defer to the judgment of local commanders when it comes to determining which actions are appropriate.


The Pentagon itself celebrated gay pride for the first time in a modest but emotional ceremony last month, less than a year after the US military officially lifted a ban on homosexuals serving openly in the armed forces.

The military's "Don't Ask, Don't Tell" policy came to an end last September after nearly two decades, marking a milestone in the quest for gay rights.

An estimated 14,000 troops were expelled from the force under the law, which had been in place since 1993.