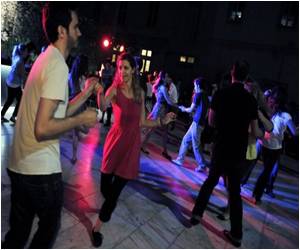 Tokyo, which is known as one of the world's clubbing capitals with its wild nightlife, is all set to survive a potentially ruinous police crackdown on -- of all things -- dancing.

In the topsy-turvy world of Japan's clubland, party-goers currently risk being arrested for failing to obey "No Dancing" signs at venues.


An antiquated law prohibiting dancing after midnight, zealously enforced by police in recent years, has decimated much of Japan's dance scene, with Tokyo taking some big hits.


However, with one eye on the 2020 Olympics, which was last year awarded to Tokyo, Japanese lawmakers have decided the time has come to change the party-pooping rule.

A government committee last month agreed the Law on Control and Improvement of Amusement Business, introduced in 1948 to curb prostitution at dance halls, needed overhauling.

"This law is unnecessary," committee secretary general Tsukasa Akimoto, of the ruling Liberal Democratic Party, told AFP. "Why should dancing be illegal? Obviously the Olympics are a factor. It's realistic to expect the law to be changed by the end of this year."

Tokyo prides itself as having one of the world's most vibrant clubbing cultures yet for years the city's famed nightspots have technically been operating illegally.

After decades of turning a blind eye to the clubs, a police crackdown began following the 2010 death of a 22-year-old student after a fight in an Osaka club.

Hit by a wave of raids, most of the city's venues were shut down for licensing violations, pulling the plug on Osaka's thriving dance scene.

Other cities quickly felt the pinch.

Big-name DJ Takkyu Ishino had a set broken up in Fukuoka when police crashed in and shut down the party in 2012. Ishino's angry response on social media, "Dance is not a crime", has been retweeted over 3,700 times.

Fellow techno mega-star Ken Ishii said: "I've had clubs cut the power to seem quiet inside because cops were snooping around the entrance. This law looks weird today."

Tokyo club owners have also been arrested for permitting dancing after hours, while Japan's hedonistic beach raves have been strangled by red tape.

The problem stems from classifications.

Because nightclubs serve alcohol, they fall into the same legal category as cabaret bars, where customers pay to drink in the company of hostesses.

Generally speaking they must close by midnight, prompting Tokyo's famous super-clubs to skirt the law by operating as "live music" venues, where dancing is banned.

Or at least certain movements are.

"Stupid as it sounds, you can sway back and forth but not side to side," said DJ Ko Kimura, a founding member of the C4 pressure group, which meets regularly with politicians and police chiefs.

"The police could come in and bust people any time, like writing speeding tickets," he added. "But as long as there's no trouble or noise, they don't."

Owners take no chances, hanging 'No dancing' signs and banning words such as "DJ" and "dance", as well as closing times, from event info.

Security guards outside Tokyo's dance clubs emerge ninja-like from the shadows with torches, politely 'shushing' patrons as they leave, so as not to upset the neighbours and reduce the risk of a police raid.

The International Olympic Committee's decision to award the 2020 Games to Tokyo brought into sharp relief the current state of affairs for club owners.

"Can you imagine foreign athletes coming for the Olympics, wanting to party and getting arrested for dancing?" said Kimura. "It's ridiculous. But we're very close now to being able to change the law now."

The original 1948 law was tightened in the 1980s after a teenage girl was murdered in Tokyo after being picked up at a disco.

"The yakuza (Japanese organised crime syndicate members) aren't really involved in the club scene -- it doesn't pay enough," said Kimura. "Drugs are not a big problem in Japanese clubs. But what the police tell us constantly is they don't want drunken club-goers fighting in the streets."

But with Olympics coming to Tokyo, Ishii, who composed the theme tune for the 1998 Winter Games, insisted the future looks bright.

"There's a better atmosphere," he said. "I hope this vibe continues and we see a reasonable law passed which will boost the cultural scene."