Italy Appeals to the Sponsors to Restore Nero's Golden House 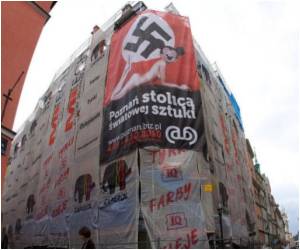 Claiming that 31 million euros ($42 million) was needed to repair the majestic complex, Italy has appealed to the sponsors to help restore Emperor Nero's Golden House in the heart of Rome.

"This fantastic place, one of the symbols of ancient Rome, could become one of the biggest site attractions in the world," Culture Minister Dario Franceschini told journalists as he showed them around the 16,000 square meter underground complex.

Archaeologists in charge of restoring the "Domus Aurea" to its former glory said 31 million euros was needed over the next four years.


The palace, which lies on a hill overlooking the Colosseum, was built by Nero after the great fire of Rome in 64 A.D. had razed the aristocratic dwellings in the area to the ground, and featured groves of fruit trees, vineyards and an artificial lake.
Advertisement
Designed as a party villa rather than a home -- with 300 rooms but no sleeping quarters -- its walls were covered by extensive gold leaf, semi-precious stones and ivory, and colourful frescoes.

"The state is ready to contribute, I hope that a big company will join the project, " Franceschini said, adding that he was appealing to both foreign and Italian businesses.

"This unique restoration site is an excellent chance to link their name to the beauty of Rome," he said.

Teodora Filippi, director of the Golden House, said the four-year project would be dedicated in large part to remodelling the gardens on top of complex in order to stop water damage which has led to partial roof collapses in the past.

The state is offering a 65-percent tax reduction to entice private companies to help invest in the restoration of the eternal city's public monuments, Franceschini said.

The government has already persuaded the private sector to help renovate other iconic landmarks.

Luxury jeweller Bulgari announced earlier this year that it would help renovate the city's famous Spanish Steps, while shoemaker Tod's is financing works at the Colosseum and fashion house Fendi is sponsoring the refurbishment of the Trevi Fountain.

Indian American Rajen Kathi Amongst White House Recipe Contest Winners
Rajen Dev, an 11-year-old American of Indian origin emerged one of the winners of the 'Healthy ......

House of Prayer in Berlin to Bring Together Jews, Christians and Muslims Under the Same Roof
A pastor, a rabbi and an imam in Berlin hope to create history by bringing together people of ......