Israeli Inhuman Strikes Cause Gaza Death Toll to Rise to 172 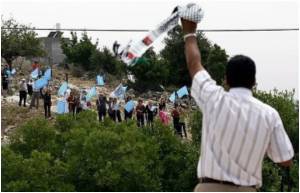 Israeli strikes have raised the death toll in Gaza to 172 and the number of wounded is expected to be around 1230.

Media reports quoted these figures, even as the Israel's aerial pounding of the Gaza Strip entered its seventh day on Monday.

Meanwhile, the BBC reports that thousands of Palestinians are fleeing northern parts of Gaza after Israel warned it was targeting the area in its campaign to stop the continuing rocket attacks from Gaza militants.


The United Nations (UN) has claimed that about 17,000 people have sought refuge in its facilities.

The dead are said to include 18 members of one family who died in an Israeli missile strike on Saturday evening.
Advertisement
A spokesman for the Israeli Defense Forces (IDF), Lieutenant-Colonel Peter Lerner, disputed the casualty figures, saying they were not objective.

Israel says it is targeting Hamas militants and "terror sites", including the homes of senior operatives.

However, the UN has estimated that 77 per cent of the people killed in Gaza have been civilians.

The UN Security Council has called for a ceasefire and peace talks.

First Private Security Firm Opened by Gaza Bodyguards
A newly-formed team of bodyguards come together to form, "Secure Land", a security firm whose ......

Children Deaf From Gaza Wars Healed By Visiting Surgeon
Wafa Sarhan was devastated to think her two sons would never hear her voice again after an Israeli ....

Besieged Gazans Take Refuge in Drugs to Deal With Stress
Abu Atallah got hooked on painkillers after his house was destroyed and his 12-year-old daughter ......