Interactive Video Games may Cause Injuries 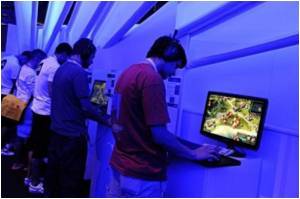 Interactive gaming devices are extremely popular but what one needs to know is that they could cause several injuries like sprains and abrasions.

Interactive gaming devices, such as Nintendo Wii differ from traditional video games as they require participants to physically mime the movements of a particular sport or activity while competing against a real or computer-generated competitor.

The next time you see your son hooked on to a video game, tell him to spend an hour extra with the joystick, for it might just turn him into a laparoscopic surgeon some day, says a new study.
Advertisement

With the increased physical movement and interaction, researchers sought to determine what types of injuries were sustained from these interactive gaming devices.


They reviewed National Electronic Injury Surveillance System data on video game-related injuries, sustained by people of all ages, between January 1, 2004 and January 1, 2009.

Focus on 3D Videogames at the Tokyo Game Show

3D racing games, monkeys and gore-splattered shoot-em ups are the main attractions at an annual, action-packed Japanese video game industry gala that kicked off on Thursday.
Advertisement
A total of 696 video game-related injuries were reported over the 5-year period. The mean age of those injured was 16.5 years with an age range of 1 month to 86 years.

There were 604 injuries resulting from traditional games with 92 injuries from the newer interactive games. Of the interactive game injuries, 49 were sustained by males (53.3 percent) and 43 by females (46.7 percent).

When compared to the traditional video game group, participants in the interactive group were significantly more likely to injure their shoulder, ankle, and foot.

"Younger children under the age of 10 should be supervised while video games are being played to prevent bystander injuries, which are more common with interactive games," he added.

The findings were presented at the American Academy of Pediatrics (AAP) National Conference and Exhibition in San Francisco.

A study has found that playing violent video games can increase aggression in a person for as long as 24 hours after playing.
Advertisement
Advertisement
This site uses cookies to deliver our services.By using our site, you acknowledge that you have read and understand our Cookie Policy, Privacy Policy, and our Terms of Use  Ok, Got it. Close
×