Focus on 3D Videogames at the Tokyo Game Show 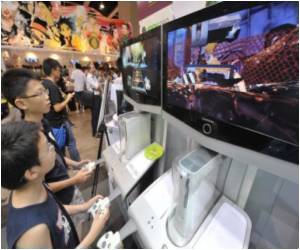 3D racing games, monkeys and gore-splattered shoot-em ups are the main attractions at an annual, action-packed Japanese video game industry gala that kicked off on Thursday.

Nearly 200 hardware and software makers gathered at the four-day Tokyo Game Show at the Makuhari Messe convention hall near Tokyo.


Games developers and hardware makers are vying for a piece of the 3D and motion-sensing gaming space as competition between the industry's giants heats up ahead of the traditional rush of new releases in the run-in to Christmas.

Sony Computer Entertainment (SCE) said 35 titles will be released to coincide with the late October Japan launch of the system.

They include the highly anticipated Killzone 3, which will give players an optional, enhanced 3D view of whizzing bullets and splattering blood as they eliminate their on-screen enemies.

Those looking for a more peaceful pastime might consider Me & My Pet, which gives the gamer an immersive 3D universe with a cute monkey to look after.

The PlayStation Move made its debut in Europe on Wednesday and will launch in North America on September 19.

"Games will lead the 3D revolution, there is no doubt," SCE executive Hiroshi Kawano told a media briefing at the show, noting how the technology was fast becoming more popular in movies, music and television.

Sony will offer an upgrade to PlayStation 3 consoles allowing users to enjoy 3D content on Blu-ray discs one month earlier than planned on September 21 due to strong demand, he added.

Eyes were also on Microsoft's long-awaited Kinect motion-sensing system for the Xbox 360 videogame console, which will hit the Japanese market on November 20.

The launch comes as rivals Microsoft and Sony look to close in on Japan's Nintendo, which pioneered motion control gaming with the launch of its hit Wii consoles in 2006 and has outsold both the Xbox and PlayStation3.

Nintendo, which is not taking part in this week's show, is to launch the 3DS, a new version of the hugely popular DS handheld game console with a 3D capability that does not require the user to wear special glasses.

Capcom also drew a big crowd with the next installment in the long-running Monster Hunter series, due for December release for the PSP hand-held console.

Also on display was the latest in Capcom's Street Fighter series as well as a Hello Kitty parachuting game that will be available on iPhones, as game makers expand their range for the burgeoning smartphone market.

The show opens to the public on Saturday.