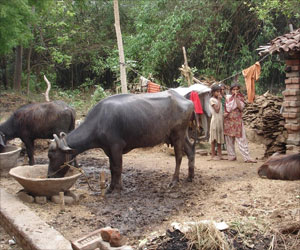 Visceral leishmaniasis (VL) is the second most prevalent parasitic killer with an estimated 500,000 human infections and 50,000 deaths every year. Leishmania parasites are transmitted through the bite of phlebotomine sand flies. Fighting the insects by treating cattle with the long-lasting insecticide, fipronil, could substantially reduce VL in areas where people and cattle live in proximity, says a new study.

Two-thirds of VL cases occur on the Indian subcontinent, and 90% of the Indian VL cases are reported in the densely populated and the impoverished state of Bihar. Female sand flies there primarily bite humans and cattle (mostly at night), and after sand fly eggs hatch, the larvae feed on organic matter, the most abundant source being cow patties. At present, control of sand flies in India involves indoor residual spraying with pyrethroid insecticides, but Bihari villagers regularly sleep outdoors during the hot summer months.

How Effective are Rapid Diagnostic Tests for the Diagnosis of Visceral Leishmaniasis?

An independent review has been conducted by researchers to test the effectiveness of rapid diagnostic tests in diagnosing patients with visceral leishmaniasis (VL)
Advertisement
‘Feeding cattle with low concentrations of fipronil in drug form does not harm mammals, but, can kill adult blood-feeding sand flies that feed on the cattle feces and combat visceral leishmaniasis infections.’

Fipronil is an insecticide with a long half-life. The insecticide remains in the system of animals for several weeks to several months, dependent on the concentration administered. Fipronil does not harm mammals at low concentrations, but when fed to cattle at low concentrations in drug form, can kill adult blood-feeding sand flies and sand fly larvae that feed on the cattle feces. Fipronil-based sand fly control could, therefore, last for several months following a single treatment--and complement the practice of indoor spraying.


David Poché, from Texas A&M University in College Station, USA, and colleagues set out to explore the insecticide's potential to control sand flies. The researchers developed a mathematical model that describes the effects of fipronil-induced mortality on a sand fly population within a village in Bihar. They describe the model and evaluate its performance based on known parameters. Then they use the model to simulate fipronil-based control schemes with different treatment timing and frequency, and compare their effect on reductions in sand fly populations during spring and summer (June, July, and August are the period of peak human exposure).

Overall, the simulation results suggest that the success of fipronil treatment depends not only on the frequency of applications but also on the timing about the sand fly lifecycle. Maintaining high drug levels in cattle feces during the period of high larval abundance seems particularly important.

As the researchers discuss, "while more frequent applications obviously are more efficacious, they also are more expensive and more difficult logistically. Thus, the ability to assess not only efficacy of treatment schemes per se but also their cost-effectiveness and their logistical feasibility is of paramount importance". In this context, they mention an estimated cost of $1 per cow per treatment, as well as the fact that milk production per cow is estimated to increase by $0.50 per day, thus offering an incentive to villagers to treat their animals.

Further evaluation of sand fly control through the use of fipronil-based drugs in cattle, the researchers say, ideally, would involve a field trial in Bihar. Such a trial could provide data on the actual proportion of adult sand flies that obtain their blood meal from cattle and the proportion of eggs laid in organic matter containing cattle feces; numbers that are currently unknown and therefore force the researchers to make assumptions that cause uncertainty in the model predictions.

Suggesting that their model could be adapted to settings where donkeys, dogs, rabbits, or rodents are the main animal targets of blood-thirsty sand flies, the researchers hope that it "will prove useful in the a priori evaluation of the potential role of treatment schemes involving the use of fipronil-based drugs in the control of leishmaniasis on the Indian Subcontinent and beyond".

The study is published in PLOS Neglected Tropical Diseases.

Leishmaniasis And the Mechanism Behind Its Spread

Important information about the transmission of human leishmaniasis- a group of infectious diseases that claim the lives of more than 100,000 people every year has now been revealed by a new study
Advertisement
<< Fruit Flies Model to Fight Cancer Caused by Human Papillomav...
Russian Tuberculosis is Found to be the Most Infectious >>

India has been asked by a Sudanese scientist to keep supplying the drug SSG, the only option available to treat leishmaniasis in the East African nation.