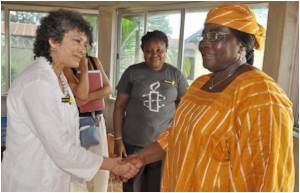 India has 37 percent of women's representation in the Asia Pacific provincial and regional assemblies, which are the highest tier of sub-national government.

Provincial and regional assemblies are the highest tier of sub-national government, and out of the countries in the Asia Pacific with this level of representation Afghanistan (30 percent), Australia (27.8 percent), India (37 percent), New Zealand (29.4 percent) and Viet Nam (23.88 percent) have the highest levels of women's representation.

Harassment of Pakistani women at the work place has brought about the Protection against Harassment of Women at the Workplace Act, but the bill is yet to benefit them.
Advertisement

A new report from the United Nations Development Programme (UNDP) says that more countries in Asia and the Pacific than ever before have elected local governments and national parliaments, yet stronger action is needed to ensure women are elected to local representative and leadership positions.


The report, Women's Representation in Local Government in Asia and the Pacific, quantifies and analyzes for the first time women's representation at rural, urban, district and provincial levels across the region.

Next Four Years Will See More Working Women Than Men

A British think-tank has predicted that in the next four years there will be more working women than men.
Advertisement
It emphasizes that local governments offer one of the most important arenas for women's political participation and can have a more direct impact on people's lives and livelihoods than national parliaments.

UNDP Deputy Regional Director for Asia-Pacific, Nicholas Rosellini, said: "Women's representation in local councils is critical. Bold steps are needed to significantly increase the numbers. For most poor people in Asia-Pacific, local governments are the most important political arena. They also have an important role in encouraging women's political participation."

The report says that more emphasis must be placed on having women elected into leadership positions.

Across the different levels of sub-national government it is the countries with quotas such as Bangladesh, India and Pakistan, or other affirmative action policies such as Viet Nam, which have the largest rates of women's representation. However this does not translate into women's election to leadership positions such as council chairs or heads.

In the Pacific, which has one of the lowest percentages of women in national politics of any region in the world, customary notions about women's role in society may be the biggest impediment to their political participation.

Representation of women in politics at the national level has made slight progress since commitments were made by most governments at the Fourth World Conference on Women in Beijing in 1995 to achieve an international target of 30 percent.

At the rural council level, the percentage of women elected has a wide distribution. India leads at more than 35 percent, Pakistan just over 30 percent and Bangladesh at nearly 25 percent, while Tuvalu, Kiribati, Vanuatu and Tonga all have less than 10 percent of women elected at the rural council level. Sri Lanka has the second lowest representation recorded at just 1.6 percent.

The report notes that there is a general lack of data on women at the lowest levels of sub-national government up to the district level. Where countries have district councils and data is available there is overall a better rate of women's representation than in rural and urban councils.

The report notes that sub-national governments on average in Asia and the Pacific have a higher representation of women in elected and appointed decision-making positions than at the national level.

Iron Intake Calculator Calculate Ideal Weight for Infants Blood Pressure Calculator Drug Interaction Checker A-Z Drug Brands in India Hearing Loss Calculator Daily Calorie Requirements Find a Doctor The Essence of Yoga Sanatogen
This site uses cookies to deliver our services. By using our site, you acknowledge that you have read and understand our Cookie Policy, Privacy Policy, and our Terms of Use