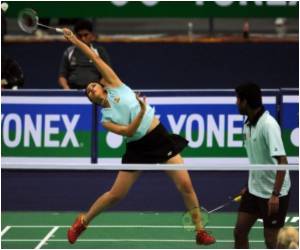 A new ruling that requires female badminton players to wear skirts on court is causing unease among players as they prepare to adopt the new compulsory dress code.

The Indian Open, which begins next Tuesday, will be the last tournament in which women can wear shorts on court before the skirt requirement comes into force on May 1.

TSA Scanners at Airports Can Embarrass You: It Reveals Boob Jobs and Prosthetic Testicles

If you thought airport scanners could detect only explosives or liquids, be prepared to be embarrassed.
Advertisement

The Badminton World Federation (BWF) announced the change in 2009 in a bid to boost the sport's profile among viewers and sponsors.


Doubles specialist and Indian glamour girl Jwala Gutta, who has always played in skirts, said the new dress code might help to raise interest but players should not be forced to conform.

To protect passengers' modesty when going through full-body airport scanners, a product called Flying Pasties has been launched by a company in Las Vegas.
Advertisement
"You cannot make it compulsory for everyone to wear skirts. It depends on each individual and their comfortable level. I am not sure people will like being told what to wear and what not to," she said.

World number three Saina Nehwal, the top seed at the April 26-May 1 Indian Open, is one of the many players in India who prefers to wear shorts on court.

She said that interest in tennis was greater partly because of the attraction of female stars such as Maria Sharapova or the Williams sisters, whose on-court outfits are often as remarked about as their game.

"Anything that helps makes the sport attractive should be welcomed," said the 27-year-old Gutta, whose eye-catching looks and daring dress sense on and off court have won her a loyal following at home.

"But instead of enforcing rules on players, the federation should ask sponsors to come up with innovative dresses.

"You can add a lot of colour, experiment with styling and stuff like that. That way it will ensure players' comfort and take care of the glamour aspect as well."

Another Indian player, who asked not to be named, said she was uncomfortable with the new ruling.

"I wear skirts or dresses only on special occasions, but never in tournaments," she said. "Skirts hamper my movement when I play."

Despite rapid modernisation, India remains a generally conservative country where public displays of sexuality are taboo and women are expected to dress modestly.

Mamascarf: To Veil Women's Modesty When Breastfeeding In Public

A Brit woman has designed a special 'shawl' that turns into a baby hammock to protect mums' modesty while breast-feeding in public.
Advertisement
<< Minimizing Side Effects In Chemoradiation Could Improve Pat...
Married Couples Focus on Marital 'Fairness'; Unmarried Coup... >>