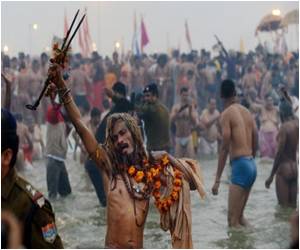 120 million pilgrims washed away their sins by plunging in the holy waters during the world's largest religious festival.

The two-month-long Kumbh Mela Hindu festival celebrated every 12 years at the conjunction of two sacred rivers on the outskirts of the northern Indian city of Allahabad drew massive crowds of Hindu devotees, ascetics and foreign tourists.


The festival involves crowd management on a jaw-dropping scale and despite all the precautions was hit by tragedy last month when a stampede at a train station in Allahabad killed 36 pilgrims who were returning from the festival.
Advertisement
Assorted dreadlocked, naked holy men, priests and self-proclaimed saints from all over the country assembled for the spectacle that offers a rare glimpse of the dizzying range of Indian spiritualism.

Despite the hardships of waking early, plunging into the polluted river water and the relentless crush of the crowds, pilgrims from all over the world described feeling spiritually uplifted and amazed by the scale of the event.

"There is a sense of relief because the festival finally is coming to an end. Most of the pilgrims have returned back home," said Mishra.

He said the job of dismantling the infrastructure that sprawled over 5,000 acres (2,000 hectares) to house the pilgrims had already begun.

"We built a tent city to celebrate the Kumbh Mela and now we are tearing it down," he said.

Mishra said five electrical substations and tens of thousands of streetlights that gave the improvised city its yellow glow between dusk and dawn would be removed by Sunday night.

All police stations, mobile field hospitals, fire stations, shops, and cafes were now shut and more than 35,000 makeshift toilets had been removed, he said.

The Kumbh Mela has its origins in Hindu mythology, which describes how a few drops of the nectar of immortality fell on the four places that host the festival -- Allahabad, Nasik, Ujjain and Haridwar.

The "Mother Ganges" is worshipped as a god and is seen as the giver and taker of life. In many cases, pilgrims used up all their money to come to the Kumbh Mela, hoping that their prayers could come true.

"People from all walks of life participate in the festival but there is one thing common among all of them -- they have a desire to lead a pure life," said Chandra Bala, a temple priest in Allahabad city.