Inception Helmet That Tricks the Mind into Thinking Fake is Real 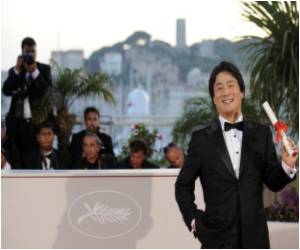 Researchers have developed an Inception-style helmet that fools the human mind into believing that fake scenes are real.

The device fools the wearer into thinking that TV scenes they are being shown are live when in fact they were recorded.

Pharmaceutical experts warned that the rapid growth of Internet commerce has led to an explosion of counterfeit drugs being sold worldwide.
Advertisement

Even after the mechanism of the experiment was explained, some test subjects were not able to distinguish between the two.


The scientists behind the project said that it was effectively the same process as that which takes place in 'Inception,' the high concept thriller from 2010.

People and their pets often end up resembling each other, but image-obsessed Americans are taking that age-old relationship a step further.
Advertisement
In the film Leonardo Di Caprio plays an industrial spy who is hired to plant an idea in the mind of a businessman by one of his rivals.

The central conceit - which is similar to that in the 'Matrix' series - is that in a powerful dream state we are unable to tell what is real and what isn't.

In 'Inception' the main characters are dreaming within their dreams, giving more complexity to the labyrinthine plot.

The test involved a system known as Substitutional Reality (SR) which has been developed at the RIKEN Brain Science Institute's Laboratory for Adaptive Intelligence in Japan.

Lead researcher Keisuke Suzuki said that it could be a "powerful tool to investigate how our conscious experiences are constituted in daily natural scenes."

"In a dream, we naturally accept what is happening and hardly doubt its reality, however unrealistic it may seem on reflection," the Daily Mail quoted him as telling the Guardian.

"Our motivation is to explore the cognitive mechanisms underlying our strong conviction in reality.

"How can people trust what they perceive? Answering these questions requires an experimental platform which can present scenes that participants believe are completely real, but where we are still able to manipulate the contents," he added.

In the simple but effective experiment, test subjects were filmed entering a room and being told what to do by the researchers.

The first one was "fake live," which was actually a recording of a researcher at the door of the test room asking if the subject felt OK.

Then there was a "doppelganger" scene where the subject saw the recording of themselves entering the room.

Thirdly, they saw a second "fake live scene" in which the researcher comes back into the room and explains how it all works.

The fourth and final scenes was live and featured the researcher coming back in and saying everything else until that point had been a recording.

In most cases the doppelganger scene caught the attention of the test subjects and they realised it was a recording.

However, some were not able to distinguish between live and recorded even after the entire experiment was explained to them.

This meant they took the fake live scenes to be real - and were unable to tell them from reality.

The results also showed that if the test subjects moved their heads then it made it more likely they would experience this Inception style effect.

Professor Suzuki said that the tests could help understand psychiatric patients who have delusions, as they can see more than one reality at the same time.

Interpol announced that it has developed a new app in collaboration with search engine giant Google that allows people to check whether a product is genuine or a fake.
Advertisement
<< Cancer Metastasis can be Delayed With Plant-based Substance...
Red Wine and Chocolate may Not Actually Reduce the Risk of ... >>