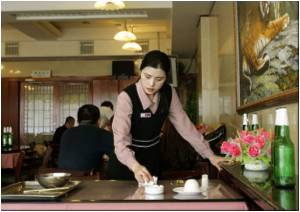 Tucking into a traditional delicacy to mark the end of the lunar month at a packed Hanoi restaurant is one of Vietnam's growing ranks of proud pooch owners. If you're wondering what the delicacy is, the you'd be surprised to learn that it is dog meat. Irony at it's finest.

Canine meat has long been on the menu in Vietnam. But now a growing love of the four-legged friends means that one man's pet can be another's dog sausage -- quite literally as far as dog bandits are concerned.

The official Xinhua News Agency has reported that dog meat has been removed from all officially designated Olympic restaurants.
Advertisement

"We never kill our own dogs for their meat. Here I'm eating in a restaurant so I don't care which dogs they killed or how," Pham Dang Tien, 53, said as he chewed contentedly on a plate of boiled dog.


Dog meat is good for health and virility, believes Tien, who sees no contradiction between these monthly meat binges and owning a dog -- his family have had a string of beloved pet pooches over the course of 20 years.

North Korea's state media on Thursday talked up the virtues of dog meat, saying the controversial cuisine is a prized delicacy for coping with the summer heat.
Advertisement
For many older Vietnamese, dogs are an essential part of traditional Vietnamese cuisine that can coexist with pet ownership. Those dogs that end up on the dinner table are traditionally beaten to death.

But as the popularity of keeping animals at home rises along with the economy and living standards, more young people feel like 16-year-old Nguyen Anh Hong.

"I just don't understand how people can eat dogs -- they are lovely pets," she said.

The love affair has a dark side -- growing ranks of thieves go from small town to small town in rural areas of Vietnam stealing pets to sell to dog meat restaurants.

Although the value of the thefts -- dog meat fetches around six dollars per kilo -- is too low to concern the Vietnamese police, the loss of a treasured pet to the cooking pot means emotions run high.

In June, a man was beaten to death after hundreds of villagers caught him red-handed trying to steal a family dog in Nghe An province, the VNExpress news site reported, triggering an outpouring of public support for the mob.

"It's not right to beat a man to death but anyone in this situation would do the same," one reader, who lost a pet to the bandits, wrote on the site.

"The young generation now seems to love animals very much," he added.

In the countryside, local mongrels are kept as pets or guard dogs. It is these, more nondescript, animals which are most vulnerable to the dog bandits.

Most of the dogs served in Hoang Giang's restaurant are local breeds raised specifically to be eaten -- but as local dogs are also kept as pets in the countryside, it is hard to know which animals are stolen, and which are farmed.

While exotic pet dogs are found only in cities, "in the countryside people will continue to see dogs as meat," he said.

Typically, Vietnamese "eat dog meat at the end of the lunar month to get rid of bad luck. That's what business people often do", said 30-year-old Giang, a specialist dog meat chef.

As he prepared a plate of canine meat in the kitchen of his busy restaurant, Giang told AFP that his small establishment served up to seven dogs a day at that time of the month -- and business is reliably solid.

Dog is served in a range of ways -- from boiled to barbecued -- often with shrimp sauce, rice noodles and fresh herbs, he said.

For Nguyen Bao Sinh, a luxury kennel owner in Hanoi, Vietnam needs to move away from its traditional love of canine meat and learn from other pet-loving cultures.

Sinh, who run's Hanoi's only luxury kennel and grooming parlour for pets, said he has seen a rise in the number of pet-mad Vietnamese.

His establishment offers "hotel rooms" for pets whose owners go away on business or holidays -- and even has a cemetery for dogs and cats, where hundreds of pets are buried, and monks perform blessings every year.

"It would be better if the state had a law banning the eating of dog meat," Sinh said.

"However, we should not discriminate or look down upon those eating dog meat," he told AFP, adding that the key was to gradually convince the public to respect and love animals.