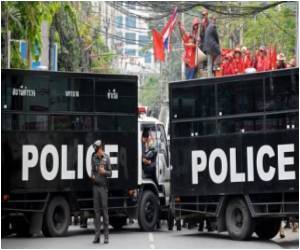 Students gather in the morning sunshine to sing the national anthem, raise the Thai flag and take daily exercise on a grassy yard surrounded by flowering bougainvillea, as roosters peck in the dirt.

75 pharmacies functioning in Porompat, Imphal have become the latest victims of monetary demands by militants.
Advertisement

But the presence of guns in this otherwise tranquil scene underscores the danger that teachers like Malatee face every day.


Education workers are a top target for insurgents in Thailand's Muslim-majority southern provinces, and her school has already lost one to a militant attack.

Taliban Thursday kidnapped four Pakistan health workers involved in immunization campaign in the North-West Frontier region. Their fate remains unknown.
Advertisement
The Thai army says more than half of its troops in the region are deployed to protect educational institutions and teachers, some of whom carry their own guns for protection in case of an ambush during their daily commute.

"I don't know what's along the way on the roadside. Sometimes grenades were found, so I'm scared," said Malatee, a 28-year-old Muslim who teaches English at Ban Takeh primary school in Pattani province.

"I'm afraid that it will be my turn or I'll be the target. I'm afraid to stay late in the evening because it's dangerous, so I hurry home instead of teaching late."

Despite the increased security at schools across the region, the killings show no sign of ending.

He was the 131st education worker killed since 2004 in the Thai south, where many schools have also been torched.

At Malatee's school, where the students are all Muslims, armed watchmen provide around-the-clock protection.

"We're afraid people might burn down the school, especially at night," said one of the guards, Magoseng Ali.

Asked what he would do if there was an attack, he replied: "I'll shoot them back!"

A six-year-old conflict in Thailand's Muslim-majority southern provinces near the border with Malaysia has left more than 4,100 people dead, including many civilians.

About 30,000 soldiers are stationed in the region along with thousands of paramilitary troops, battling shadowy militants whose precise aims are unclear.

The near-daily attacks are indiscriminate, targeting both soldiers and civilians, Buddhists and Muslims.

The southern region was once an autonomous Malay sultanate until Buddhist Thailand annexed it a century ago, provoking decades of tension that flared up into the current insurgency in January 2004.

Struggling to quell the unrest, the authorities have imposed emergency rule in the area for nearly five years, allowing the army to detain suspects for questioning without charge.

Critics accuse the government of failing to address the grievances of Thailand's Malay Muslim minority, including alleged abuses by the military and a perceived lack of respect for their ethnic identity, language and religion.

Teachers working in non-religious schools are frequently targeted because they are seen as a symbol of government authority. Militants view the school system as an effort by Bangkok to impose Buddhist culture on the south.

At state schools many Buddhist teachers, fearing for their lives, have transferred out of the region.

Malatee says she sometimes thinks about looking for a different job but well-paid work is hard to find in Thailand's deep south, one of the country's poorest regions.

She also worries for the students' future if nobody will teach them.

"When I work with children, I'm happy. I feel proud that I teach them. When I started being a teacher, there were not many attacks. Now I feel a bond with them," she said. "That's one of the reasons why I don't want to quit."

Thirteen Islamic militants have been arrested in Pakistan after a girl's high school is set on fire in the Charbagh area in the troubled Swat district in northwest.
Advertisement

Medical Staffs of Imphal Protests Against Extortion Demands by Militants

If the auto rickshaw was the target last week, so were medical professionals of the Regional Institute of Medical Sciences (RIMS) in Imphal, Manipur.
Advertisement