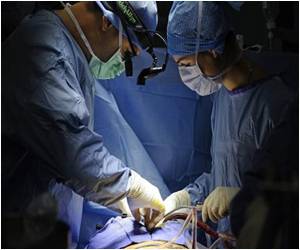 Implantable cardioverter defibrillators (ICDs) are associated with improved survival among heart failure patients whose left ventricles only pump 30 to 35 percent of blood out of the heart with each contraction.

This is according to a study from the Duke Clinical Research Institute. The findings, published in the June 4 issue of the Journal of the American Medical Association, support existing recommendations to implant ICDs in patients with a left ventricular ejection fraction (LVEF) - a measurement of how much blood is squeezed out of the heart - of 35 percent or lower.

Doctors Do Not Communicate Impact of Heart Devices With Patients: Study

New research shows that physicians do not talk to patients about the psychosocial impact and long-term risks of implanting cardioverter defibrillators (ICDs) to treat irregular heart rhythms.
Advertisement

"Our findings fill an important gap in knowledge, as most randomized clinical trials of ICDs include heart failure patients with a median LVEF of well below 30 percent," said Sana Al-Khatib, M.D., MHS, the study's lead investigator and associate professor of medicine at Duke.


"Given that a large number ICDs are implanted in patients with a LVEF between 30 to 35 percent, understanding outcomes in such patients is important."

High costs have led doctors in the developing world to reuse heart devices of US patients to treat seriously ill heart disease patients without any problems.
Advertisement
ICDs are small devices implanted in the chest to monitor the heart's rhythm and deliver small electrical pulses or shocks to help treat life-threatening heart rhythm disorders. Previous clinical trials have shown that ICDs are the best therapy currently available to prevent sudden cardiac death in patients with heart failure.

The researchers found that survival of heart failure patients with a LVEF of 30 to 35 percent was significantly improved in those with ICDs versus those without ICDs. Three-year mortality rates dropped from 55 percent to 51.4 percent when an ICD was implanted.

Similarly, ICDs were associated with increased survival among heart failure patients with a LVEF of less than 30 percent, with three-year mortality rates dropping from 57.6 percent to 45 percent with ICD use.

To better understand outcomes among heart failure patients with a LVEF of 30 to 35 percent, the researchers studied the National Cardiovascular Data Registry, intended to track primary prevention ICDs implanted in Medicare beneficiaries, making it the largest repository of ICD implants in the United States. They compared individuals in the registry with heart failure patients in the Get With the Guidelines-Heart Failure database who also had a LVEF of 30 to 35 percent but did not have ICDs.