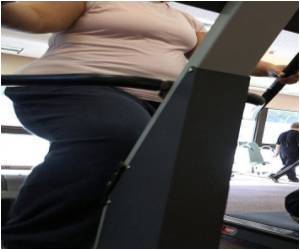 Overeating combined with the wrong mix of fats in one's diet can cause obesity to be carried over from one generation to the next, researchers in France reported Friday.

Omega-6 and omega-3, both polyunsaturated fatty acids, are each critical to good health.

But too much of the first and not enough of the second can lead to overweight offspring, the scientists showed in experiments with mice designed to mirror recent shifts in human diet.


Over the last four decades, the ratio of omega-6 to omega-3 in a typical Western diet has shifted from a healthy five-to-one to 15-to-one in much of Europe, and up to 40-to-one in the United States.

"We are indeed much more than what we eat, but what we eat can nevertheless help us to be much more than what we are". - Adelle Davis There are thousands out there battling 'the bulge'. With childhood obesity on the rise even children are not spared. If your weight issues are threatening to weigh you down learn more about obesity by taking part in this quiz.
Advertisement
In the breast milk of American women, the average ratio has gone from six-to-one to 18-to-one.

Earlier studies have established a link between such imbalances and heart disease.

But "this is the first time that we have shown a trans-generational increase in obesity" linked to omega intake, said Gerard Ailhaud, a biochemist at the University of Nice-Sophia Antipolis and main architect of the study.

"Omega six is like a fat-producing bomb," he told AFP by phone.

Experts differ on whether obesity is more importantly due to the percentage of fat in one's diet or the sheer amount of calories consumed.

The findings, published in the US-based Journal of Lipid Research, add yet another dimension to the debate, and could shed new light on the obesity epidemic that has swept across the globe, mainly in rich nations.

They also suggest that persistence within families of health-threatening weight gain -- while not genetic in origin -- may not be entirely due to environmental factors either.

The link between omega imbalance and obesity "is probably epigenetic," said Ailhaud, referring to the complex process whereby the information in genes is translated into chemical activity.

"The genome and the DNA of the rodents has not been modified, but these factors can influence the way in which certain genes are expressed."

In the experiments, four generations of mice were fed a 35-percent fat diet with the omega imbalance now found in much of the developed world.

The result was progressively fatter mice at birth, generation after generation.

The rodents also developed insulin-resistance, a telltale symptom for diabetes 2, one of the most common -- and debilitating -- consequences of obesity in humans.

The equally undesirable increase in omega-6 and drop in omega-3 can be partly explained by the change from grass-fed to grain-fed livestock, Ailhaud explained.

Grass is rich in omega-3. "But to increase productivity, feed was shifted to grain meal, especially corn, which contains a high concentration of omega-6," he said.

Adding a small quantity of flaxseed oil to animal feed could help restore a healthy omega balance in meat and dairy products, he added.

In France, health authorities recommend that fat intake should between 30 and 40 percent of calories consumed, while the US Food and Drug Administration suggests a range of 20-to-30 percent.

Both governments agree that most of that intake should be from polyunsaturated and monosaturated fats such as fish, nuts and vegetable oils rather than the saturated fats found in red meat and dairy products.

Morning breakfast is an important meal of the day, especially for Indians. Eating a healthy breakfast is a must as it keeps them active all day. So, try out these eight healthy Indian breakfast recipes and reap numerous health benefits for a healthy mind and body.
Advertisement
<< Fitness Guru Suggests Yoga for Fat US Soldiers
How Wrinkles are Formed >>