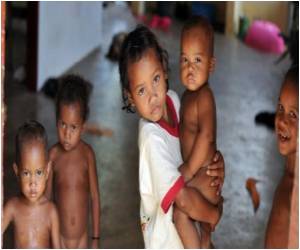 Children and teenagers who go through periods of hunger face health problems that could become chronic and destructive, reveals a new study.


Overall, more than one in 10 children (13.5 percent) and one in four youth (28.6 percent) reported poor health in the final round of the survey.

The humble potato which is being promoted as an answer to soaring rice prices in an impoverished Bangladesh is turned down by hungry Bangladeshis.
Advertisement
Rates of poor health were higher among those who were hungry at any time than among those who had never experienced hunger (32.9 percent vs. 12.8 percent for children and 47.3 percent vs. 27.9 percent for youth).

"The mechanism by which childhood hunger negatively affects health is not well understood. Food insecurity has been associated with emotional and psychological stress among children, which could exert a negative effect on general health and contribute to heightened risk of chronic diseases," the authors said.

"The findings of this study add to the literature showing that hunger is a serious risk factor for long-term poor health among children and youth, pointing to the relevance of severe food insecurity as an identifiable marker of vulnerability.

The findings also reinforce the need for advocacy for policy interventions to eliminate problems of poverty and food insecurity, which pose an unacceptable but remediable risk to children," they added. The report findings were published in journal Pediatrics and Adolescent Medicine.

More News on:
Hungry? - But you Just Ate! Why does your Stomach Growl with Hunger Health Insurance - India Fullness Factor, Satiety Index and Glycemic Index for Weight Watchers

The Essence of Yoga Turmeric Powder - Health Benefits, Uses & Side Effects Sinopril (2mg) (Lacidipine) Loram (2 mg) (Lorazepam) Find a Hospital Iron Intake Calculator Blood - Sugar Chart Find a Doctor Blood Donation - Recipients A-Z Drug Brands in India
This site uses cookies to deliver our services. By using our site, you acknowledge that you have read and understand our Cookie Policy, Privacy Policy, and our Terms of Use