How Gorillas Infuse Confidence in Their Playmates 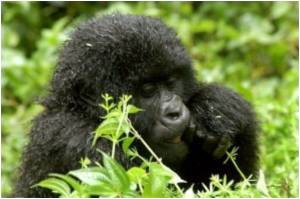 During playtime, gorillas flash their teeth to convey an attitude of friendliness to their playmates as well as to reassure them that they do not mean any harm.

The researchers, from the University of Portsmouth, study the facial expressions of primates to uncover the evolutionary origins of human smiling and laughter.


She said that their "playface" seems to be a foundation of human laughter.

"[During play, gorillas] open their mouths and cover their teeth as if to say, 'I could bite you but I'm not going to'," the BBC quoted Dr Waller as saying.
Advertisement
The other expression used by the primates, which indicates one of the origins of human smiling, is when they show both rows of "sparkly white teeth".

Dr Waller said that it is not a playful expression.

"It's a greeting; a subordinate display."

She elucidated that the different contexts in which gorillas use these facial expressions show that smiling and laughing are probably rooted in very different "ancestral displays".

"People think we smile when we're happy, but that's not true," she said.

"You smile when its appropriate in a situation. You smile at someone in the corridor - you don't laugh at them."

Dr Waller and her colleagues watched the animals and discovered that the gorillas flashed their upper teeth as they played during specifically "rough" and intense play and they would play for longer when they bore their teeth.

"It's possibly because, when play gets rough, you need an extra signal to show each other that [you're] just playing," Dr Waller said.

She pointed out that the findings revealed the foundation of people's social laughter; when humans laugh along in conversation to put one another at ease.

"I always think of facial signals as about reducing uncertainty," said Dr Waller.

"We use [these] non-verbal signals all the time," she added.

The study has been published in the American Journal of Primatology.

Source: ANI
Advertisement
<< Cause of Serious Diseases Understood
One Must Not Think They Have Quit Smoking Just Because They... >>

Scientists Identify Malignant Malaria in Gorillas
The parasite that causes malignant malaria in humans has been found in gorillas by scientists from ....

Humans Related To Orangutans, Not Chimps Or Gorillas
In a new research, a team of scientists has suggested that humans most likely share a common ......

Gorillas Blamed for AIDS Spread to Humans: Study
French virologists on Sunday said they had found a new subtype of the AIDS virus that appears to ......