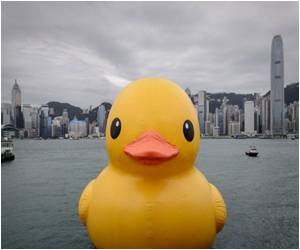 According to reports, the popularity of a giant inflatable duck afloat in Hong Kong harbour has not gone unnoticed in mainland China, where two copies have been launched in as many days.

Thousands of visitors have flocked to view the 16.5-metre blow-up, conceived by Dutch artist Florentijn Hofman, since it was towed to the Hong Kong waterfront on May 2, with duck mania gripping the city.

But China has now seen the launch of two of its own ducks, albeit smaller versions.


The first was in the northern city of Tianjin on Friday and was funded by a property developer, the daily Global Times reported. The second took to the water Saturday in the central city of Wuhan, according to a blog from the Yangtze daily.
Advertisement
Since 2007 Hofman's duck has travelled to 13 different cities in nine countries ranging from Brazil to Australia in its journey around the world.

The artist said he hopes the duck, which is due to stay in Hong Kong until June 9, will act as a "catalyst" to connect people to public art.

Olympics Sees Haute Cuisine in Home of Peking Duck
The Olympic Games have helped bring high class western cuisine to Beijing but its survival in the .....