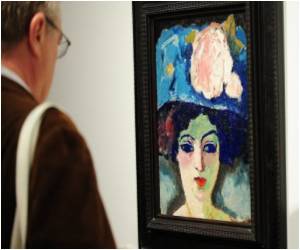 Hong Kong's Asia Contemporary Art Show has an unusual take on what constitutes an art gallery with artwork sprawled on queen-sized beds, hung in front of television sets and even placed on toilet counters.

Hosted in a luxury hotel, the bi-annual fair caters for emerging artists hoping to break into global markets and the unorthodox venue is an attempt to reduce costs in a city fast becoming known as an international arts hub but where sky-high rents pose a challenge for artists and galleries.

Thousands attended the four-day show, which emphasises young and mid-career artists and is the city's second-largest art fair after the Hong Kong edition of the prestigious Art Basel.


Collectors moved from room to room inside the five-star JW Marriott hotel where more than 70 galleries showcased paintings, sculptures and photography from around the Asia region and the world.
Advertisement
"The informality of the hotel is one of the characters of the art fair," the show's director Mark Saunderson told AFP.

"It's a bit of a journey of discovery from room to room," he said, adding that the hotel format of the fair also helps to cut costs.

"The whole spirit of what we are trying to do with the show is obviously to offer an opportunity for work to come to Hong Kong, which otherwise would probably never be seen," he said.

Galleries in the city deal with many costs including expensive rents, making them adopt a selection process that excludes many potential artists, Saunderson said.

However, experts say that South-East Asian artwork has a major advantage: its price tag, with Vietnamese, Indonesian and Malaysian pieces popular on the international scene.

With the value of Vietnamese works having increased tenfold over the past 15 years, new artists are seeking more global exposure.

"The most important thing is that young artists like me have a chance to show their works," Vietnamese artist Dang Thao Ngoc told AFP.

Dang, from Hanoi, is known for using colourful oil paintings to depict family members and also to represent life in Vietnam.

"In Hong Kong, a lot of people come and see the artworks. They care about the artworks a lot," she said, adding that this was not the case for her back home in Vietnam.

Newly reforming Myanmar is also seeing more galleries open up as the art world catches on to its artists, with dozens now selling successfully.

Chinese painters paint very quick, and they paint quantity. The Burmese artists don't do this. They tend to paint less paintings, but at much higher quality said Sidney Cowell, director at the Asia Fine Art Gallery.

The art on offer ranges from the traditional to the more eclectic.

In one room belonging to a Japanese gallery, a comical sculpture of a bald Asian man wearing a schoolgirl's uniform was on display, his arms open and ready for an embrace.

The art fair showcased works ranging from HK$30,000 to HK$200,000 and generated over HK$18 million in transaction sales during its previous May edition.

The boom in Hong Kong's international art market has been driven partly by the fast-growing wealth of mainland Chinese buyers.

Over 3,000 international artists from 245 of the world's leading galleries were displayed in May at Art Basel in the southern Chinese city.

Gagosian, White Cube, Acquavella, Lehmann Maupin and Galerie Perrotin are just some of the big-name galleries to have arrived in the city in the past two years.

Source: AFP
Advertisement
<< Researchers: Kids' Scientific Skills May Be Enhanced By The...
Survey: 1 in 3 Don't Like Facebook Friends Enough to Spend ... >>