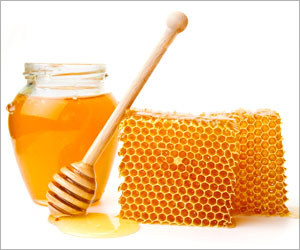 A powerful link between Surgihoney - a medicinal type of honey and the destruction of Fusarium - a fungus that can cause blindness or even death, has been discovered by researchers from Britain's University of Manchester.

Scientists have identified the effect of honey used since ancient times for the treatment of several diseases, on pathogenic fungi that can cause devastating infections in vulnerable people.

If you thought only humans can get addicted to coffee, think again. New study shows that bees may select caffeinated nectar over an uncaffeinated nectar.
Advertisement
‘Surgihoney, a biologically engineered honey, produces chemically reactive molecules containing oxygen, to test how effective it could be in destroying the fungus Fusarium, which is found on plants and in soil.’

The researchers used different concentrations of Surgihoney, a biologically engineered honey that produces chemically reactive molecules containing oxygen, to test how effective it could be in destroying the fungus Fusarium, which is found on plants and in soil.


Even the lowest concentrations had a significant effect in breaking down the cell wall of the fungus, demonstrating its potential as a future treatment for patients, the study revealed. Chronic infections, such as those found in long-lasting wounds comprise about 60-80 percent of infectious diseases in humans and the way fungi invades wounds is associated with the use of broad-spectrum antibiotics.

Effects of two broad-spectrum systemic insecticides, fipronil and imidacloprid, on honeybees was highlighted in a new research published in Environmental Toxicology and Chemistry .
Advertisement
Chronic infections, such as those found in long-lasting wounds, in which fungi invades, comprise about 60-80 percent of infectious diseases in humans. Biofilms - thin layers of micro organisms, which group together - contribute to the severity and delayed healing of such chronic wounds, the researchers said.

"Through my research I wanted to show the potential for honey as a healing agent to break through these biofilms and in doing so increase the process of healing. What I found amazing is that honey actually works better than some antifungals," Zain Habib Alhindi, research student at the Manchester University said in an official statement.

The study opens door for further work on the application of honey for many fungal infections and allows scientists to adopt different options for treating a range of superficial infections, researchers concluded.

Hundreds of individual honey bees were tracked for several weeks after scientists attached radio-frequency identification tags on them.
Advertisement
<< Mothers Who Sleep With Babies Likelier to Carry on Breastfe...
Early Human Ancestor Did Not Have the Jaws To Eat Hard Food >>

Gene Activity of Bees Tracked When Eating and Not Eating Honey

Changes in gene activity in response to diet in the Western honey bee ( Apis mellifera ) had been broadly studied and significant differences were found to occur.

More News on:
Honey: Health Benefits of the Golden Liquid

Drug Side Effects Calculator Turmeric Powder - Health Benefits, Uses & Side Effects Sinopril (2mg) (Lacidipine) Indian Medical Journals Color Blindness Calculator Loram (2 mg) (Lorazepam) Accident and Trauma Care The Essence of Yoga Find a Doctor A-Z Drug Brands in India
This site uses cookies to deliver our services. By using our site, you acknowledge that you have read and understand our Cookie Policy, Privacy Policy, and our Terms of Use