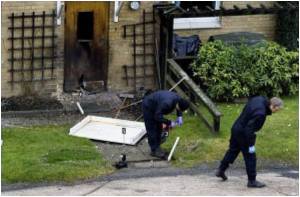 An HIV-positive airman from America has been charged with assault for having unprotected sex with 11 people.

Sergeant David Gutierrez, 43, is accused of violating military law by breaking a squadron commander's, in which he was asked to inform his partners about his HIV status before sex and to use condoms, reports the Daily Mail.


Gutierrez's wife Gina told investigators her husband became infected with HIV in 2007 and started his series of sins after being assigned to McConnell Air Force Base in December 2008.


He allegedly bragged to her that he never told them he was HIV-positive.

He is facing 24 charges and could face more than 50 years in jail if convicted of his crimes.

Gutierrez, a member of the U.S.A.F. for 20 years, met most of his victims on swinging websites and has been under arrest at McConnell Air Force Base in Wichita, Kansas, since August.