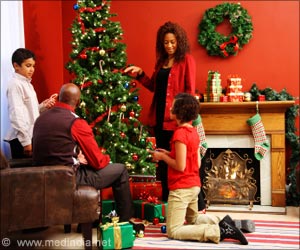 Do you know why fruitcake is the most common Christmas gift or how the tradition of kissing under mistletoe came about?

According to Stuff.co.nz, the custom of kissing underneath mistletoe began in the Victorian era when people believed it lead to marriage and promoted fertility.

Fruit cake became a universal offering for Christmas when it was discovered that plums and cherries could be preserved for a long time by soaking it in large solutions of sugar, which was cheap at the time.


The white stripes on the cherished candy canes represent the purity of Jesus Christ, the three red stripes stand for the Father, the Son, and the Holy Spirit, and the red stripe represents Jesus Christ's blood.
Advertisement
Christmas trees symbolise eternal life, and were introduced in England when Queen Victoria married Prince Albert, who was a German.

Germans used to host a procession on Feast Day of Adam and Eve carrying "paradise trees" with apples representing the forbidden fruit.

Santa's reindeers were introduced in Clement Moore's 1822 poem 'A Visit From Saint Nicholas' now called 'Twas the Night Before Christmas'.

Spain's Annual Lottery Jackpot Brings Christmas Cheer
In Spain, champagne corks popped as the annual "Fat One" Christmas lottery, which has the world's .....