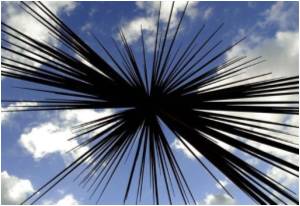 Some 14 massive bronze sculptures by British artist Damien Hirst charting the gestation of a human being from conception to birth were unveiled in Qatar.

The "Miraculous Journey" statues were uncovered for a day this week outside the Sidra Medical and Research Centre, still under construction on the outskirts of Doha.

They were put back under wraps until January 14 to "protect them while work is ongoing" in the area, the Qatar Museums Authority explained.


The project is an initiative by Sheikha Al-Mayassa bint Hamad Al-Thani, the emir's sister who heads the museums authority and wants to give a boost to art in the gas-rich Gulf state.
Advertisement
The installation consists of 14 figures which took three years to create, ranging between 4.8 metres (15.75 feet) and 10.7 metres (35 feet) in height and weighing between nine and 28 tonnes each.

They begin with the fertilisation of an egg and end with a fully-formed baby. It portrays the gestation of a foetus.

The unveiling coincided with the Doha opening on Thursday of a first solo exhibition in the Middle East by controversial artist Hirst. Entitled Relics, it runs until January 22.

The exhibition showcases Hirst's diamond-encrusted skull, "For the Love of God," as well as a shark preserved in formaldehyde.

The display comes as Qatar prepares to host the 2022 World Cup.

Source: AFP
Advertisement
<< Philippine Overseas Workers to be Taught to Save
Ban on Euthanasia Upheld in Canadian Court >>

Bunny Sculpture Shows Promise of New Material for 3-D Shaping
The bunny-like features can still be easily observed with a microscope though its surface has been ....

Global Warming to be Depicted in Sand Sculpture
A 7- feet structure has been created by renowned sand sculptor Sudarsan Pattnaik on Puri beach of .....