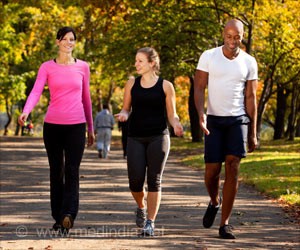 The glucose metabolism in muscles and insulin sensitivity in type 2 diabetes can be improved by High-intensity interval training (HIIT), finds new study.

After a period of two-week training, the glucose uptake in thigh muscles may be returned to a normal level.

All You Need to Know about High Intensity Interval Training

HIIT alternates between low and high-intensity workouts, thereby burning more fat and is much better than cardio exercises.
Advertisement
‘Glucose metabolism in diabetics can be improved by High-Intensity Interval Training (HIIT).’

The discovery was made in a research project led by Senior Research Fellow Kari Kalliokoski and Project Manager Jarna Hannukainen at the University of Turku, Finland. The project studied the health impacts of high-intensity interval training on healthy people and diabetics, and the results are encouraging.


HIIT has a rapid impact on metabolism. However, no great differences have been demonstrated between the impact of HIIT and moderate intensity continuous training over a longer period of time. The main benefit of high-intensity interval training is mostly that it takes less time, says Doctoral Candidate Tanja Sjöros.

High-intensity interval training (HIIT) helps to improve a person's fitness by decreasing exercise time and by simultaneously increasing metabolism.
Advertisement
First in the study, healthy men in their forties and fifties did either high-intensity interval training or traditional, moderate intensity training. Later, a group of people with insulin resistance carried out a similar two-week training routine. Some of them had type 2 diabetes and some prediabetes, i.e. their blood sugar levels were elevated but not yet high enough to indicate type 2 diabetes.

Before the training started, the glucose metabolism and insulin sensitivity of the insulin resistant persons were significantly reduced compared to the group of healthy individuals. However, already after two weeks of high intensity training, which amounted to six training sessions, the glucose metabolism in the thigh muscles achieved the starting level of the healthy control group, tells Sjöros.

Glucose metabolism and insulin sensitivity improved after both the high-intensity training and the moderate intensity continuous training, so the study suggests that people can choose the type of training based on their own preferences.

However, the group that did moderate intensity training achieved only half of the improvement experienced by the HIIT group during the two-week period. Therefore, this type of training requires a longer period of time. If you have only little time to spare, high-interval training could be a great alternative to traditional training that requires more time but is lower in intensity, says Sjöros.

HIIT also improves endurance. In the study, the endurance of type 2 diabetics increased only in the HIIT group, but earlier studies have shown that, when the training routine continues for over two weeks, endurance increases with the traditional, moderate intensity training just as much as it does with high-interval training.

The research results published in the Scandinavian Journal of Medicine & Science in Sports highlight the beneficial effects of exercise on glucose metabolism especially in diabetics and in those who suffer from disturbances in the glucose metabolism. According to previous research, exercise lowers blood sugar as much as diabetes medication. Therefore, exercise is an essential part of treating and preventing diabetes.

It's particularly good news that when it comes to the glucose metabolism and endurance it does not seem to matter in whether the exercise takes place over a longer period of time as moderate training or over a short period as high-interval training. Everyone can choose the type of training that suits them best. In general, you can achieve the best results for you body by using both training methods, encourages Sjöros.

For aging adults, high-intensity training is the best option, because it confers health benefits at both metabolic and molecular levels.
Advertisement
<< Newly Discovered Protein Increases the Efficacy of Vaccines
Fish Eyes May Help Understand Inherited Blindness >>

The TSC22D4 acts as a molecular switch in the liver and from there regulates genes that can influence the metabolism throughout the body.