Hearing Have Evolved Over 300 Million Years Ago: Study 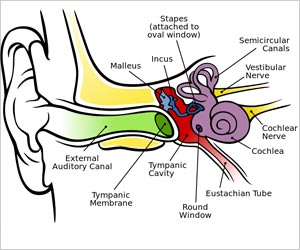 The early terrestrial vertebrates were able to hear 300 million years ago, even when there was no tympanic middle ear development, finds a new study.

The research led by Aarhus University described that lungfish and salamanders can hear, despite of not having an outer ear or tympanic middle ear.


The study revealed that not only the terrestrial adult salamanders, but also the fully aquatic juvenile salamanders and even the lungfish, which are completely maladapted to aerial hearing were able to detect airborne sound despite of not having a tympanic middle ear by sensing the vibrations induced by sound waves.


The researchers concluded with their study that the early terrestrial vertebrates without tympanic middle ears were not deaf to airborne sound during the first 100 million years on land.

The study is published in two journals Proceedings of the Royal Society B and The Journal of Experimental Biology.

'Modified' Common Antibiotic May Beat Risk of Hearing Loss
Scientists have developed a modified version of an aminoglycoside, the most commonly used class of antibiotics worldwide, that may eliminate the risk of hearing loss.
READ MORE

Vitamin Supplement Prevents the Risk of Noise-induced Hearing Loss
Tested on mice, a simple chemical compound that is a precursor to vitamin B3, can prevent noise-induced hearing loss, say Researchers from Weill Cornell Medical College and the Gladstone Institutes.
READ MORE

Research Points to Potential Way to Restore Hearing
There's a cast of characters deep inside your ears -- many types of tiny cells are working together to allow you to hear.
READ MORE