Healthy Option Meals at Fast Food Chains Not So Healthy 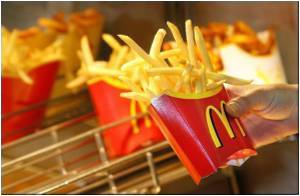 Healthy meals offered by fast-food chains are not as healthy as they are believed to be, an Australian analysis has found.

Public health experts have said the research reinforced calls for a junk-food tax, with research also showing a tax would be more effective than promoting healthy eating and exercise.

According to the study less than half the salads available at fast-food outlets were low fat but there was a twentyfold variation in sugar and fat between salads.

The study found not even a single sandwich to be low-salt,.

"But bread is a major contributor to sodium and with processed cheese and meat, it is no surprise they are high in salt," she said.

Outlets should gradually reformulate meals so all had lower levels of so-called "negative nutrients".

"If you just cut them by 50 percent, consumers are not going to like the change. But if all fast-food outlets reduce sodium content by 10 percent, that would make a massive difference," she said.

"Reducing salt can make a huge difference but it has got to be backed up by regulated targets," he said.