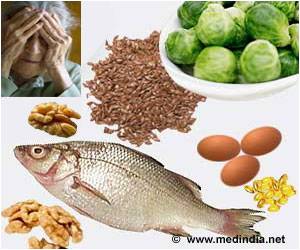 Elderly people who ate healthy food and had higher levels of certain vitamins and omega 3 fatty acids in their blood scored better on mental acuity tests than those who ate junk food, a study released Wednesday showed.

The study published in Neurology, the journal of the American Academy of Neurology, also showed that eating better could help reduce the brain shrinkage commonly associated with Alzheimer's disease.

"This approach clearly shows the biological and neurological activity that's associated with actual nutrient levels, both good and bad," said Maret Traber, a principal investigator at the Linus Pauling Institute and study co-author.


Researchers at the institute at Oregon State University conducted the study, one of the first of its kind, along with scientists at the Oregon Health and Science University in Portland.

Creating a little kitchen garden at home is an immensely fulfilling way to incorporate healing herbs bundled with protective nutrients in the daily diets.
Advertisement
The study, carried out among 104 people at an average age of 87, specifically measured a wide range of blood nutrient levels instead of basing results on food questionnaires, which are less precise and less reliable.

"The vitamins and nutrients you get from eating a wide range of fruits, vegetables and fish can be measured in blood biomarkers," Traber said.

"I'm a firm believer these nutrients have strong potential to protect your brain and make it work better."

Researchers noted the positive effects of high levels of vitamins B, C, D and E, as well as the healthy oils most commonly found in fish, on mental quickness and brain size.

Those with a higher intake of trans-fats -- commonly found in fried foods, fast foods and other less healthy diet options -- did not perform as well on cognitive tests.

Researchers found that while age and education affected performance on the cognitive tests, nutrient status accounted for 17 percent of the variation in scores, and 37 percent of the differences in brain volume.

Of those who took part in the study, seven percent showed a vitamin B12 deficiency, and 25 percent did not have enough vitamin D in their systems.

"These findings are based on average people eating average American diets," Traber said.

"If anyone right now is considering a New Year's resolution to improve their diet, this would certainly give them another reason to eat more fruits and vegetables."

Study co-author Gene Bowman of the Oregon Health and Science University added while results needed to be confirmed, "it is very exciting to think that people could potentially stop their brains from shrinking and keep them sharp by adjusting their diet."

Vitamin B-12 is also known as cobalamine or cyanocobalamine, owing to the presence of the metal, cobalt. Cyanocobalamine is used in most supplements because it is readily converted to active forms of vitamin B-12 in the body.
Advertisement
<< DNA Twist To Schizophrenia, Literally
Celeb Solutions For Health Problems Slammed >>

The Healthy Way of Eating with Sattvic Diet

Tips to Live Longer
News Archive
News Resource
Advertisement
News Category
Do Instant Formula Foods Cause More Harm Than Good? Is a Plant-based Meat Healthier Than Animal Products? Are You Eating Enough Fiber to Stay Healthy? Preventive Vitamin A Supplementation is Missed by 2 in 5 Indian Kids Does a Mother's Diet Affect the Quality of Breast Milk?
More News
Sign up for Wellness Consult a Doctor Sign up for Selfcare