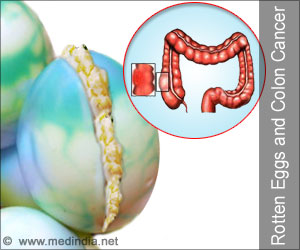 Researchers from the University of Texas Medical Branch, in their new study, have linked hydrogen sulfide gas to colon cancer.

Their results revealed how the pungent-smelling gas emitted by rotten eggs plays an important role in the metabolism of colon cancer.

According to the study, colon cancer cells practically live on hydrogen sulfide gas. This gas which is produced by rotten eggs is needed in large amounts by the cells to survive and grow.


"They love it and they need it," UTMB professor Csaba Szabo, explained. "Colon cancer cells thrive on this stuff -- our data show that they use it to make energy, to divide, to grow and to invade the host."

The researchers further revealed that by blocking CBS, they managed to demonstrate anti-colon cancer effects in mice. They also found that colon cancer cells, devoid of hydrogen sulfide gas, grew slowly, and had a considerably decrease in angiogenesis - a process by which a cancerous tumor produces more blood vessels to extract more nutrients and oxygen from the host.

This new discovery may help scientists discover newer and better treatments for colon cancer. "This is a chance to do research that really matters," Hellmich said. "We're very excited to have that opportunity."

E.coli Can Cause Colon Cancer
University of Liverpool researchers accuse a type of E.coli of promoting colon cancer. The pks gene found in these E.coli is believed to be the culprit.
READ MORE