Can stem cell cure replace corneal transplantation in the future? Will this cure revolutionize the treatment for corneal blindness in the world? An Indo-American duo is trying to unveil this major breakthrough. The research on stem cell has found that the stem cells in eye possess the ability to reinstate eye health even after getting affected by scarring or whitening of the cornea that leads to blindness.

The research being spearheaded by Hyderabad-based Dr. Sayan Basu, consultant corneal surgeon and scientist, L V Prasad Eye Institute (LVPEI) and Prof. James L. Funderburgh of the University of Pittsburgh School of Medicine in the US.

According to the research scientist, curing the potentially blinding haze of a scar on the cornea may be as simple as growing stem cells from a tiny biopsy of the undamaged eye of patient and then placing them on the injury site.


In an exclusive interview with Medindia, Dr. Sayan Basu talks about the research and how it is going to change the lives of thousands of blind people.

1. Could you tell us about the experiment and the breakthrough result?

The cornea is the transparent front part of the eye and it covers the iris and pupil, and anterior chamber, and it functions like a lens that allows the light to enter and contributes to 65 - 75 percent of the eye's total focusing power Therefore, damage to it lead to cloudiness or haziness that makes it hard or impossible to see and the body usually responds to corneal injuries by making an opaque scar tissue.

We had previously developed a technique to obtain ocular stem cells from tiny biopsies at the surface of the eye and a region between the cornea and sclera known as the limbus. Removal of tissue from this region heals rapidly with little discomfort and no disruption of vision.

After collecting biopsies from banked human donor eyes, we expanded the numbers of cells in a culture plate using human serum to nourish them. We conducted several tests to verify that these cells were, in fact, corneal stem cells.

We then tested the human stem cells in a mouse model of corneal injury. They used a gel of fibrin, a protein found in blood clots that are commonly used as a surgical adhesive, to glue the cells to the injury site. We found the scarred corneas of mice healed and became clear again within four weeks of treatment, while those of untreated mice remained clouded.

Stem cells are mother of all cells as they can divide and become any specialized cell of the body. Their discovery has given modern medicine the possibility of miraculous cure for most chronic diseases. However they are still in the research phase and much of the work that is being done in various labs of the world needs to be validated by others before they will be accepted from for treatment.

One such application is the eye is to treat corneal blindness that currently requires corneal transplantation.

3. Could you give us latest details of the pilot-clinical trial?

The clinical trial is intended to confirm that stromal stem cells can indeed be isolated from tiny limbal biopsies in eyes of patients who have corneal scars and that the procedure of isolating these cells refining them in the laboratory and placing them back in the same eye is safe.

We are also trying to figure out the dosage of cells needed to achieve the desired therapeutic effects. This pilot-clinical trial will also have a control arm which will not receive any stem cells so that we can conclusively show what difference the stem cells are making.

This trial is being done on 5 patients in each group and all patients will be followed for 6-months. We expect the trials to be completed by 2015. We believe, the therapy would bring dramatic reduction in blind people

There are, according to recent estimates, 1-2 lakh (1,00,000- 2,00,000) people who need corneal transplantations in India at present but only 10,000 to 30,000 transplantations take place every year. This huge gap in supply and demand leads to further increase in the backlog and burden of corneal blindness.

As a corneal transplant surgeon, I believe that it is almost impossible to bridge this gap by increasing Eye-banking infrastructure or by training more corneal surgeons in our country. This is because corneal transplantation itself is not the end of the story. People with transplants need life-long follow-up and medical care. Many grafts reject and fail with time.

Therefore, I have been interested in developing an alternative to corneal transplantation that can address both limitations of this approach, namely, need for donor tissue and risk of rejection. I believe that stem cell therapy holds the key to solving the problem of corneal blindness in India and not corneal transplantation and that we can achieve this by using the patients own stem cells. I have been involved with basic scientists working on ocular stem cells since 2010 and have been involved in this project since 2011.

5. Could you tell us more about the technique that is used to obtain ocular stem cells from tiny biopsies?

The technique of retrieving cells from the eye is known as limbal biopsy. Limbus is the area between the white (sclera) and black (cornea) part of front of the eyeball.

In our study we described an atraumatic method of obtaining a tiny biopsy from the limbal area, which can be performed under topical anesthesia without requiring injections in the eye. The limbal tissue is then transported to the laboratory where using the technique I have developed the stromal cells are separated from the epithelial cells.

These cells are then purified over several passages to yield a higher number of highly potent stromal stem cells in a few of days. Then these cells are ready for transplantation. The technique of transplantation is also completely novel and can be performed under topical anesthesia and takes no more than a few minutes. In this technique the superficial epithelial layer of the cornea is scraped off and the cells are layered on the cornea over the scarred area as a gel. This is done by mixing the cells in one of the liquid components of biological glue called fibrin glue that is routinely used in ophthalmic surgery. As the gels with the stem cells sticks to the cornea it is covered with a contact lens and the procedure is complete.

Typically it takes no more than a month for the cells to act on the corneal wound and render it completely transparent. Patients will need only prophylactic antibiotics post-operatively for a week when the contact lens is taken off. Since these are the patients' own cells there is no need of long-term medications or risk of rejection. Also since this technique requires no sutures, there are no suture related problems post-operatively.

6. How has your association with Prof. James L. Funderburgh of the University of Pittsburgh School of Medicine in the US helped in this experiment?

Professor James Funderburgh discovered stem cells in the corneal stroma, which were capable of reversing corneal opacification. We decided to work with him so that we could use his expertise in this field to develop a stromal stem cell based method of treating corneal blindness as an alternative to corneal transplantation.

I visited his laboratory in Pittsburgh, USA and worked with him for one year between August 2012 and July 2013 as his research associate. Together we developed a minimally invasive way of obtaining the stromal stem cells from human eyes. We also showed that these cells have stem cell characteristics and are capable of restoring transparency to an experimental model of wounded cornea. These results were published recently.

The clinical implication of this research is that we have established a reliable technique of isolating potent stromal stem cells from human eyes that can be used to reverse and prevent corneal scarring and furthermore that these cells can be obtained from the eyes of the patient himself or herself. Thus there will be no need for donors or risk of rejections because the stem cells could be obtained from the patients themselves.

About Dr. Sayan Basu: he is currently Consultant Corneal Surgeon and Scientist at L V Prasad Eye Institute (LVPEI) in Hyderabad, India.  His research interests involve developing stem cell based therapies for corneal diseases like corneal scarring from infection or trauma. He performs about 300 corneal transplants every year. He has over 40 international peer reviewed scientific publications and is also on the editorial board of the British Journal of Ophthalmology. He did his under-graduation and post-graduation from Kolkata in India. 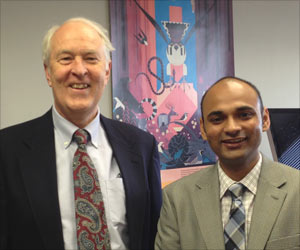 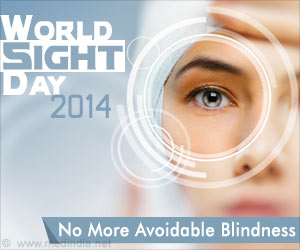