A recent study published in the New England Journal of Medicine reports that a one-time high dose of AVXS-101, a gene therapy for spinal muscular atrophy type 1 (SMA1) extends survival and helps improve motor function in patients. SMA is a neuromuscular disease caused by a single mutation in the SMN gene which results in muscle wasting and lack of motor skills and control. SMA type 1 (SMA1) is the most severe form and is apparent at birth. Children with SMA1 have a life span of 2 years and there is no treatment presently for the devastating disease.

SMA1 is a progressive, childhood, neuromuscular disease that results in muscle weakness and wastage. It is caused due to inadequate production of a protein called survival motor neuron (SMN) encoded by the SMN gene. The protein is essential for motor neuron functions. As a result, children with SMA1 fail to meet motor milestones and usually die by the age of 2 or require permanent mechanical ventilation in order to survive a litter longer.

The study was conducted by research teams at the Nationwide Children's Hospital and the Ohio State University College of Medicine in collaboration with AveXis, Inc. AveXis, Inc is a clinical-stage gene therapy company developing treatments for patients suffering from rare and life-threatening neurological genetic diseases.
Phase 1 Clinical Trial Results of a Gene Therapy for Spinal Muscular Atrophy


The study was based on administering a one-time intravenous injection of the SMN gene (AVXS-101) using a modified adeno-associated virus serotype 9 (AAV9) for delivery. It was tested on 15 patients.


‘Gene therapy, AVXS-101, for spinal muscular atrophy type 1 is able to extend the survival of SMA1 patients and improve motor functions in them.’

The following were observed in the 12 patients who received the high dose of AVXS-101. As a natural course of disease progression, spinal muscular atrophy patients require nutritional and respiratory support by the age of 12 months. They are also incapable of swallowing or speaking effectively and are almost never able to sit.

Of the patients who received the high dose of AVXS-101,
as of data assessed until August 7, 2017.


Development of the gene therapy

The current gene therapy is the result of almost three decades of foundational research by teams at Nationwide Children's and Ohio State's Wexner Medical Center. The SMA mouse model was a major achievement created by Arthur Burghes, PhD, of Ohio State. This is the standard model where all therapies including AVXS-101 are initially tested. Brian Kaspar, PhD, from Nationwide Children's discovered that AAV9 vector was capable of delivering the SMN gene to the motor neurons in the brain by crossing the blood brain barrier when injected into the vascular system. This is the basis of the drug delivery in the current gene therapy AVXS-101. The phase 1 clinical trials in humans were possible only after proving that this gene therapy could reverse the SMN protein deficiency and improve and stabilize SMA in a large animal model.

This is what Dr. Kaspar, now serving as Chief Scientific Officer at AveXis had to say about AVXS-101: "At AveXis, we are enormously pleased to see that all children who received AVXS-101 are alive and free of permanent ventilatory support at 20 months of age and older - an age where, sadly, only eight percent of untreated children with SMA Type 1 are expected to survive without permanent breathing support."
References :
Source: Medindia 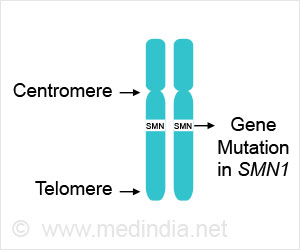 DNA Finger PrintingClinical TrialsClinical Trials - The Past and The FutureClinical Trials - Different Phases of the trialReiki and Pranic HealingGenetic Testing of DiseasesPancreasAmyotrophic Lateral Sclerosis (ALS)Placebo Effects: Rare InsightsWeaver Syndrome
Sign up for Wellness Consult a Doctor Sign up for Selfcare