Haze from Indonesian Fires may Have Killed 100,000 People 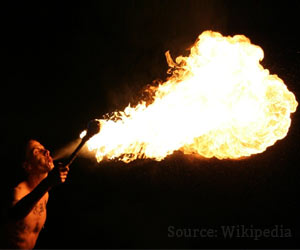 Last year, a smog outbreak in Southeast Asia may have caused over 100,000 premature deaths, according to a new study that triggered calls for action to tackle the "killer haze".

Researchers from Harvard and Columbia universities in the US estimated there were more than 90,000 early deaths in Indonesia in areas closest to haze-belching fires, and several thousand more in neighbouring Singapore and Malaysia.

A USC study has found they now have significantly fewer respiratory symptoms as a result of improved air quality.
Advertisement
‘Last years haze outbreak was the worst since 1997 due to a strong El Nino weather system, which created tinder-dry conditions in Indonesia and made peatland and forests more vulnerable.’
Tweet it Now

The new estimate, reached using a complex analytical model, is far higher than the previous official death toll given by authorities of just 19 deaths in Indonesia.


"If nothing changes, this killer haze will carry on taking a terrible toll, year after year," said Greenpeace Indonesia forest campaign Yuyun Indradi.

More than a million private cars were banned from New Delhi's roads, as authorities began trialing drastic new measures to cut smog in the capital.
Advertisement
"Failure to act immediately to stem the loss of life would be a crime." A spokesman for Indonesia's environment ministry did not immediately have any comment.

Indonesian authorities have previously insisted they are stepping up haze-fighting efforts, through such actions as banning the granting of new land for palm oil plantations and establishing an agency to restore devastated peatlands.

The haze is an annual problem caused by fires set in forest and on carbon-rich peatland in Indonesia to quickly and cheaply clear land for palm oil and pulpwood plantations.

The blazes occur mainly on Indonesia's western Sumatra island and the Indonesian part of Borneo, with monsoon winds typically blowing the haze over Singapore and Malaysia.

But last year's fires were among the worst in memory and cloaked large parts of the region in choking smog for weeks, causing huge numbers to fall ill and sending diplomatic tensions soaring.

The new study to be published in journal Environmental Research Letters, which combined satellite data with models of health impacts from smoke exposure and readings from pollution monitoring stations, estimated that 100,300 had died prematurely due to last year's fires across the three countries.

They estimated there were 91,600 deaths in Indonesia, 6,500 in Malaysia and 2,200 in Singapore. Greenpeace hailed a "groundbreaking" study they said for the first time gave a detailed breakdown of deaths from last year's fires, but cautioned that the figure was a "conservative estimate".

It only looked at health impacts on adults and the effect of dangerous fine-particulate matter, known as PM 2.5. It did not examine the effect on youngsters or of the other toxins produced by the blazes. In reality, infants are some of the most at risk from the haze, said Nursyam Ibrahim, from the West Kalimantan province branch of the Indonesian Medical Association on Borneo.

"We are the doctors who care for the vulnerable groups exposed to toxic smoke in every medical centre, and we know how awful it is to see the disease symptoms experienced by babies and children in our care," said Ibrahim.

Shannon Koplitz, a Harvard scientist who worked on the study, said she also hoped the model they had developed could help those involved with tackling the annual blazes make quick decisions "as extreme haze events are unfolding".

Last year's haze outbreak was the worst since 1997 due to a strong El Nino weather system, which created tinder-dry conditions in Indonesia and made peatland and forests more vulnerable to going up in flames.

Beijing's Focus on Coal Lost in Haze of Smog

The grimy chimneys of the coal-fired power station have belched the last of their choking fumes into Beijing city's air, authorities say - but experts doubt the plan will ease the capital's smog.
Advertisement