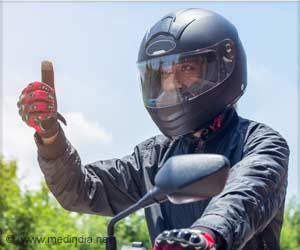 Preventing head injuries by wearing a bicycle helmet reduces the risk of brain injury, reveal statistical data. Helmets reduce 63 to 88 percent of the risk of head, brain and severe brain injuries and injuries to the upper and mid-face are reduced to 65 percent for motorists of all ages. Children under the age of 15 should wear helmets to reduce the risk of head injury by 63% and the risk of losing consciousness by 86%.

India lost 1,47,913 people to road crashes in 2017, of which 48,764 were on two-wheelers, 26,869 were car crash victims, 20,457 were pedestrian deaths, and 3,559 were cyclists. This roughly amounts to an average of over 400 deaths every day on Indian roads. As India observes the Road Safety Week till the 10th February 2019, there is a need to revisit the practice of wearing helmets and make it mandatory.

Head injury or traumatic brain injury is a leading cause of disability among children and young adults that leads to varying degrees of physical and mental stability. Fortunately, it is also one of the preventable brain disorder.
Advertisement
‘An average of 400 accident deaths occur every day on Indian roads.’
Tweet it Now

Speaking about this, Padma Shri Awardee, Dr KK Aggarwal, President, HCFI, said, "A Harm Reduction conference was organized by the HCFI and IJCP at Maple Hall, India Habitat Centre, New Delhi on 30 January 2019. The conference brought out the importance of wearing helmets and seat belts as a harm reduction strategy, among other ways. There is an urgent need to increase public awareness about traffic rules including the importance of wearing helmets and seat belts. Apart from those who drive two- and four-wheelers, pregnant women should also wear three-point seat belts. These seat belts provide significantly more benefit than risk to the mother and fetus in the event of collision."


Harm reduction are realistic (not idealistic) interventions aimed at achievable goals and done to reduce the negative effects of health behaviors without stopping the problematic health behaviors completely. However, elimination should be the primary goal.

Amnesia, is profound memory loss caused by a physical injury inflicted on the brain, by an infection or by a traumatic or emotional experience.
Advertisement
Adding further, Dr Ganesh Mani, President, IMA, New Delhi branch; and Dr Chanchal Pal, President, Lions Club, Alaknanda, said, "Reducing harm to oneself and keeping others safe should be the priority for all vehicle owners. The best way to do this is to wear helmets and seat belts and also create awareness among friends and family members about the importance of this practice. We must all take a collective pledge to adopt harm reduction strategies in all aspects of our life."

Some recommendations from the conference.

 There should be zero tolerance for not wearing helmets and seat belts.

 The government should be asked to bring in laws for mandatory cycle helmets, seat belts for back seat passengers, and seat belt for bus drivers.

 Awareness should be created about quality of helmets.

 Children < 5 years of age should not be allowed to sit in the front seat of a car. Car seats for children should be mandatory.

 In the back seat of a car, the middle portion should always have a seat belt as the person seated there is most at risk.

 The importance of helmets and seat belts should be taught in schools.

 Children from schools in high risk areas should be made to wear helmets while crossing the roads.

 Helmets provide similar protection for crashes involving motor vehicles and other causes (70 percent). In children (<15 years of age), wearing a helmet reduces the risk of head injury by 63 percent and of loss of consciousness by 86 percent.

Hypoxia is the term used to denote a deficiency in the amount of oxygen reaching the tissues.
Advertisement