Grapes and Its Protective Benefits 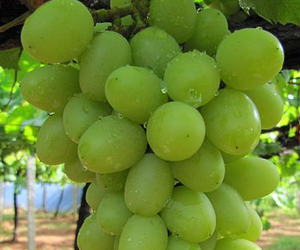 Consuming grapes may have a host of protective benefits in preventing organ damage due to metabolic syndrome, a new study has revealed.

This protective benefit from grapes is due to the presence of natural components found in grapes, known as polyphenols, researchers said.

The new study evaluated the effects of a high fat, American-style diet which included grapes as well as a diet which did not include grapes. They studied its effects on the heart, liver, kidneys, and fat tissue in obesity-prone rats.


The results pointed out that three months of a grape-enriched diet greatly helped reduce inflammatory markers throughout the body, and this was mostly found in the liver and in abdominal fat tissue.
Advertisement
"Our study suggests that a grape-enriched diet may play a critical role in protecting against metabolic syndrome and the toll it takes on the body and its organs. Both inflammation and oxidative stress play a role in cardiovascular disease progression and organ dysfunction in Type 2 diabetes. Grape intake impacted both of these components in several tissues which is a very promising finding," researchers said.

Key to Boosting Skin's Defence Against Sunburn Might be Held by Tomatoes and Grapes
Australian researchers will determine if extracts from tomatoes and grapes can bolster the skin's .....

Combating Alzheimer's Probably With Compound In Red Wine And Red Grapes
Many academic institutions will hire volunteers for a national, phase II clinical trial to inspect ....

Compound in Red Wine, Grapes May Help You Lose Weight
Researchers claim to have found a compound in red wine, grapes and other fruits that facilitate fat ...