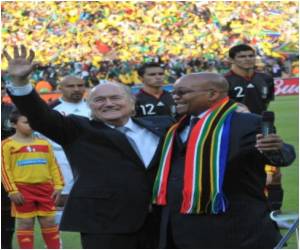 Graffiti artists have taken over to Rio's streets and have put down stark images blasting the cost of the showpiece as the World Cup comes near.

Rio city hall in February passed a decree "GrafiteRio" giving its blessing to graffiti in public places -- save for listed buildings -- as long as images were not commercial, pornographic, racist or discriminatory.

Love it or hate it, the artists' offerings are an inventive take on an event which is the subject of strong but mixed emotions among the populace.


In the district of Laranjeiras, one example of pro-Cup graffiti depicts 2002 world champion Ronaldo.

Another in the hilltop district of Santa Tereza commemorates the first of Brazil's five World Cup victories, in Sweden in 1958.
Advertisement
The other side of the coin shows a darker side to World Cup graffiti altogether.

Not far from the Maracana stadium, which will host the final, the tournament mascot is depicted raping an allegory for justice, the naked figure's eyes bound.

Next to the mascot is a message: "How many removals are made by a Cup?" The question alludes to recent expulsions of residents living in shanty accommodation near the refurbished stadium.

Another depiction shows the mascot smoking crack and wearing an "After the Cup" T-shirt.

One Rio collage shows Brazilian star Neymar and the World Cup trophy, but also a Kalashnikov rifle with a rose in its barrel, above the legend Peace and Fut'Love.

Next to him, French star Franck Ribery wears a crown above the words "Poeme de France"

One wall near the Maracana bears colorful tribute to national soccer legends, including former Cup-winning player and coach Mario Zagallo, Romario and, of course, Pele.

In the suburb of Botafogo, a wall is covered in a black and white homage -- the club colors -- to former favorites including Garrincha and Jairzinho.

Come nightfall in Botafogo, two masked artists appear to construct a graphic message on the wall of a university to slam an event they feel is all about big money.

"The $ only for repression", reads one slogan, to which the pair add in huge letters the word "COPA? (Cup)."

A grotesque head pokes out of the 'O' while a Molotov cocktail decorates the C, a nod to street protests which have rocked Brazil for months over the cost of the tournament.

"We put a Molotov cocktail not to incite violence but because it is a symbol of protest," one of the artists, "Fiuz", told AFP.

"Everything has gone crazy with this Cup, the huge cost of construction and corruption," says fellow artist "Peq1".

"People talk about it being a popular festival but it's really for the bourgeoisie.

"We are against the World Cup because FIFA came and imposed its norms in a Brazil lacking decent public services. People are dying in hospitals and education is a joke."

"Fiuz" and "Peq1" have also left their mark in the trendy central Lapa district, where one of their "creations" asks rhetorically: "The Cup for who?"

The 44-year-old is a professional painter who celebrates Rio, its Carnival and its football.

"But I prefer to paint on walls as that gives me more scope to express myself -- I am less limited by the framework,", he told AFP.

One alleyway in Lapa showcases several of his works.

One dating from last June is a commemoration of Confederations Cup success showing a crowd of demonstrators clad in Brazil shirts.

But it includes Neymar preparing to kick a ball bearing the face of ... FIFA president Sepp Blatter.

"I am not against the World Cup," insists Jambeiro. "On the contrary.

"But I was in the protests and this is my way of saying that we want football but also health and education."

He insists he is not just a "dauber" or one of those "rebels who are always against everything."

His take on 2014 will show "the incredible Hulk pulling the train" -- the Russia-based Brazilian as a superhuman force.

Guards on Close Watch After Banksy Graffiti Woes
As British street artist Banksy brought his in-your-face creations to New York City, where some ......