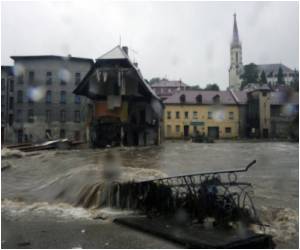 Researchers from Princeton University and the Massachusetts Institute of Technology found that regions such as the New York city metropolitan area, that experience a disastrous flood every century, could instead become submerged every one or two decades.

Using various global climate models, the team developed a simulation tool that can predict the severity of future flooding an area can expect, the journal Nature Climate Change reported.


The researchers used New York city as a test case and found that with fiercer storms and a three-foot rise in sea-level due to climate change, "100-year floods" -- a depth of roughly 5.7 feet above tide level that occurs roughly once a century -- could more likely occur every three to 20 years.

Climate Models Project Increase In Intense Rainfall In The Future

Climate change will yield more extreme rainfall in the future, shows a new study.
Advertisement
What today are New York city's "500-year floods" -- or waters that reach more than nine feet deep -- could, with climate change, occur every 25 to 240 years, the researchers wrote, according to a university statement.

The research is not only the first to examine the future intensity of storm surges, but also to offer a tool for estimating an area's vulnerability, said co-author Michael Oppenheimer, professor of geosciences and international affairs at Princeton.

"Coastal managers in cities like New York make daily decisions about costly infrastructure that would be affected by such storms. They need a reliable indicator of the risk," he said.