German Catholic Church Decrees No Sacraments If Tax Is Not Payed 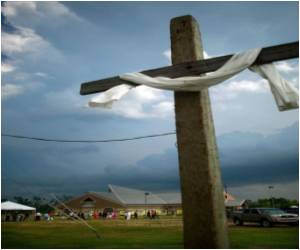 Under controversial new restrictions entering into force Germany's Roman Catholics who refuse to pay a church tax will be barred from receiving the sacraments or becoming a godparent.

In a move decried by a progressive Catholic group, the German bishops' conference last week issued a decree, saying it was "worried" about the Catholic Church's dwindling numbers and wanted to stem the decline.

Poland's annual NecroExpo offers the best pick in funeral wear and coffins if you're a trend-conscious undertaker about the latest in funeral-wear, coffins or a hearse.
Advertisement

Confession, Holy Communion, confirmation in the Church or anointing of the sick -- unless the patient's life is in danger -- are now out of bounds for anyone who leaves the Church, the decree which took effect Monday stated.


Becoming a godparent is also off-limits, it said.

Germany has had a system in place since the 19th century of asking residents to either officially declare their religion and pay a church tax, or to be classed as "non-religious".

Hindus have welcomed Roman Catholics to yoga practice.
Advertisement
A change in status from being a member of a religion requires a formal procedure to "leave the Church", as an increasing number of Germans have done, mostly from the Catholic Church but also from the Protestant faith.

The levy amounts to between eight and 10 percent of income tax, depending on where the person lives.

A report in April 2011 showed that paedophile priest scandals in Germany had contributed to the 40-percent rise in the number of Catholics leaving the Church a year earlier.

Since early 2010 and in common with other countries, Germany has been hit by revelations that hundreds of children were physically and sexually abused in institutions, all but a handful run by the Roman Catholic Church.

Although the new decree permits a religious marriage for anyone who has left the Church, it stipulates two conditions -- an okay from the local religious authorities and a promise to keep the faith and uphold the religious education of any children in the Catholic faith.

However the bishops' decree said that "if the person who has left the Church has not displayed any regret before their death, a religious burial may be refused."

Reaction to the decree has been divided.

Theodor Bolzenius, spokesman for the Central Committee of German Catholics, told AFP they were pleased that the move had been formalised "with explicit support from the Vatican".

But the progressive "We Are Church" ("Wir Sind Kirche") Catholic movement criticised it, saying: "It's a bad decree coming at a bad time."

"Instead of tackling the reasons for Church-leaving in large numbers, this bishops' decree is a threat to the people of the Church and is not going to motivate people to remain loyal or to join the community of those who pay their church tax," it said in a statement.

The Sueddeutsche Zeitung daily said it sent a "disastrous" signal and was aimed more at saving the Church's finances, while Die Welt said the bishops should be aware they risked appearing "ruthless".

On Wednesday a German court is due to rule in a case involving a canonist, Hartmut Zapp, from Freiburg who declared in 2007 that he would no longer pay his church taxes but insisted he remained a church member.

Germany's population of nearly 82 million is about one third Catholic and one third Protestant.

The Protestant Church in Germany has no similar plans, a spokeswoman said.

Malta is the only country that still outlaws divorce. Malta is planning to hold a referendum on May 28 on introducing a law to allow divorce.
Advertisement
<< Study: One in Nine Still Use 'Easy To Crack' '1234' as Thei...
Researchers Say Life Could Have Come from Outer Space >>