Genital Herpes in Africa More Virulent Than in US 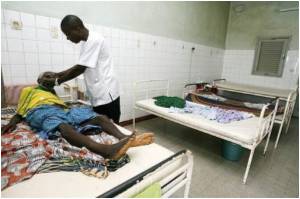 Strains of genital herpes in Africa are far more virulent than those in the United States, according to researchers at Harvard Medical School report.

The researchers arrived at this finding by testing mouse model strains of the disease against vaccine candidates. All vaccines were far more efficacious in abating the U.S. strain.

Genital herpes is a sexually- transmitted disease (STD) that affects the genitals.
Advertisement

The researchers say identification of the properties of the African viruses would open the door to developing a more potent vaccine against an infection now rampant in sub-Saharan Africa. This is important, they say, because genital herpes patients are more vulnerable to HIV/AIDS infection, as the open sores symptomatic of herpes contain a high concentration of immune cells that are targeted by HIV.


The challenge lies in formulating either a single vaccine that protects against both types of strains of the genital herpes virus or two different vaccines. The vaccine farthest along in developmentit is headed for clinical trials in about a yearworks best against the U.S. isolates of herpes simplex 2, but it also protects laboratory animals from the African viral strains if given in five-fold-higher doses.

This Interactive provides step by step visual aid showing how to correctly use condoms which can prevent transmission of HIV, other sexually transmitted diseases and pregnancy
Advertisement
This research, which appears online on April 15 in The Journal of Infectious Diseases, is led by David M. Knipe, the Higgins Professor of Microbiology and Molecular Genetics and vice chair of that department at Harvard Medical School, and Clyde Crumpacker, professor of medicine at Harvard Medical School and a physician in division of infectious disease at Beth Israel Deaconnes Medical Center. Their collaborators are former Knipe lab members Timothy E. Dudek, currently of the Ragon Institute of Massachusetts General Hospital, and Ernesto Torres-Lopez, now of the Universidad Autonoma in Monterrey, Mexico.

In southern Africa, infection rates among adults for genital herpes are exceedingly high from 80 percent to 90 percent in some groups compared to slightly less than 20 percent in the United States.

In evolutionary terms, the herpes viruses are very old. They have honed their talents to become efficient parasites in humans, often persisting for decades while causing limited or no disease symptomsalthough they can be deadly in immunocompromised persons and in newborns.

The herpes virus that causes ordinary cold sores, herpes simplex 1, is present in about 70 percent of the U.S. population. These stealthy viruses hide in nerve cells but can emerge over and over again, prompting repeated cold sore outbreaks.

Despite decades of research, there is no commercially available vaccine for herpes. But Knipe says their prototype vaccines are being tested in animals, and one such vaccine has been licensed to the French pharmaceutical firm Sanofi Pasteur.

According to Knipe, animal tests demonstrate clearly that the strains of herpes virus seen in sub-Saharan Africa are more virulent than the herpes simplex 2 virus strains seen in the United States. That difference suggests that an effective vaccine will probably have to be given to people in Africa in larger or more frequent doses. So far, says Knipe, results of animal tests are heartening.

Part of the promise in this work lies in the strong chance that a vaccine against herpes simplex 2 can help reduce the impact of HIV/AIDS in southern Africa. Epidemiological studies have shown that genital herpes infection is associated with a three-fold increase in the risk of HIV infection.

"If the rate of herpes infection can be reduced, it's conceivable the rate of HIV/AIDS infection will also come down, perhaps reducing the death rate," says Knipe.

Knipe's approach to vaccine development is based on using abnormal, live, mutant viruses to stimulate protective immune responses. These disabled viruses cannot multiply inside cells or cause symptomatic disease, but they do contain enough of the right proteins and molecules needed to arouse detection by a healthy immune system. Knipe's strategy is to trigger a strong immune response without causing disease.

"The candidate vaccine, ACAM529, is under development by Sanofi Pasteur, and under the current plan will enter phase I clinical testing in 2012," said Jim Tartaglia, a company respresentative. Phase I testing involves giving vaccine to a few human volunteers and watching for signs of toxicity. Trials for efficacy come later.

Although it has been difficult to create a vaccine for genital herpes, vaccines against a closely related herpes virusvaricella zoster virus, the cause of chicken pox and shinglesproved successful and are now widely used. This gives reason for optimism about a genital herpes vaccine.

The researchers do caution that, previously, two well-executed trials of Acyclovir, an effective, safe, antiviral drug for herpes, did decease the occurrence of genital herpes infections but failed to prevent transmission of HIV-1 in African study participants.

Genital herpes can be transmitted even if a person has no symptoms, suggesting a high risk of transmission from people with unrecognized infections of herpes simplex 2, researchers said on Tuesday.
Advertisement
<< Mortality Rate Higher Among Autistic Patients Who Also Have...
New Era in Lung Transplantation >>