Gays Welcomed in US Boy Scouts 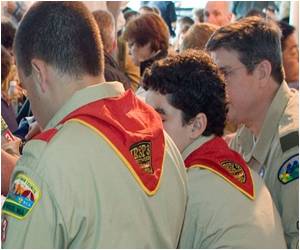 By officially welcoming gay youths into their ranks, the Boy Scouts of America are starting the new year.

For more than two decades, the iconic youth organization known for its "be prepared" ethos has explicitly barred homosexuals, in contrast to the more LGBT-friendly Girl Scouts of the USA.

Last May, the Boy Scouts' national council voted 61 percent to no longer deny membership to youth on the basis of sexual orientation -- although it retained a ban on gay and lesbian adult Scout leaders.


"We believe every child deserves the opportunity to be a part of the Scouting experience," said Deron Smith, the Boy Scouts' director of public relations, in an email to AFP.
Advertisement
"The new policy allows kids who sincerely want to be a part of Scouting to experience this life-changing program while remaining true to the long-standing virtues of the Boy Scouts of America," he said.

Prepared to be among the first openly gay Eagle Scouts is Pascal Tessier, 17, from the Washington suburb of Kensington, Maryland who with his local troop had publicly campaigned for the Boy Scouts to change its policy.

"At the time, (I) couldn't tell them I'm openly gay. This is something I can do today," Tessier told Washington's WRC television.

Founded in 1910, the Boy Scouts of America claims more than 2.6 million members -- the majority (1.53 million) being Cub Scouts aged seven through 11 -- plus one million adults.

Welcoming openly gay youth follows a year in which the US Supreme Court ruled in favor of gay marriage -- now legal in 18 states, but outlawed in 32 others -- and a growing number of celebrities going public with their homosexuality.

It also coincides with an ongoing flap over Phil Robertson, star of the popular reality TV show "Duck Dynasty," after he branded homosexuality as "sinful" in a GQ magazine interview. He was briefly suspended from the program.

But with 70 percent of its partner organizations being Christian churches and faith groups, the Boy Scouts' new stance is not without its dissidents.

The biggest single sponsor of Boy Scout chapters, the Mormon Church, has stated it will accept gay Scouts so long as they are willing to honor "standards" that include "abstinence from sexual relationships."

But others are divorcing themselves from the Boy Scouts of America, such as Troop 835 in Auburn, in the northwestern state of Washington, whose adult leadership feels homosexuality runs counter to biblical principles.

"If they announced, 'We're all going to start getting drunk,' we'd still leave," scoutmaster Jim Brass told Seattle's KING television. "And to say we're reverent but we're going to go against something specifically God said, it doesn't sit well with me."

Positioning itself to rival the Boy Scouts is Trail Life USA, an upstart that welcomes all Christian adults and youth "who do not engage in or promote sexual immorality of any kind."

?Trail Life is very much what families want,? Rob Green, a former Boy Scouts executive in Florida and South Carolina who now leads the new group, told the Dallas Morning News. ?They just don?t know it yet.?

Some corporate sponsors of the Boy Scouts are unhappy as well, but for another reason -- they regard the ongoing ban on gay adults to be discriminatory.

Earlier in December, defense and aerospace conglomerate Lockheed Martin cited "policies that discriminate on the basis of sexual orientation" as its reason to no longer contribute to the Boy Scouts.

Robert Gates, a former Eagle Scout who served as CIA director and then as secretary of defense under both presidents George W. Bush and Barack Obama, is poised to be the next Boy Scouts executive director from May 2014.

US Boy Scouts to Allow Gay Youths, Not Leaders
After a vote in the annual meeting in Texas, the Boy Scouts of America proclaimed that they will ......

Awards for Videogame Mastery Issued by US Boy Scouts
A spokesman confirmed on Friday that the Boy Scouts of America have expanded their awards for ......