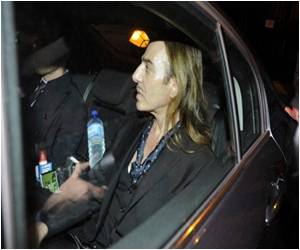 British fashion designer John Galliano, little seen ever since he was sacked by Dior in 2011 for making drunken racist tirades, reappeared in Moscow Thursday as creative director of a Russian cosmetics chain.

The L'Etoile chain, which has some 850 branches in more than 250 Russian towns, did not skimp on the event which took place in one of the most exclusive Moscow suburbs.

Galliano appeared for just a few seconds, in a halo of orange smoke, at the end of the show.


"This is an opportunity and a great challenge for me," he said later, in an interview with the official Itar-Tass news agency .

"I am confident that our partnership will lead to new and exciting events in the world of beauty for Russian women. I think the results will be beautiful and inspiring," he added.

Indian American community seems excited as prosecution drops 20 charges against young celebrity fashion designer Anand John Alexander. He faces 30 more counts of sexual assault of aspiring models.
Advertisement
Galliano, who spent nearly 15 years at Dior, is widely considered to be one of the most brilliant fashion minds of his generation. However, his rehabilitation following the racism scandal has been difficult and he has been rarely seen at public events since then.

Last year, New York's Parsons School of Design cancelled a workshop he had been set to give at the prestigious fashion college.

In an interview in Vanity Fair magazine last June, Galliano said he had been in denial about substance abuse and that he was "grateful" for his fall from grace because it forced him to confront his drug and alcohol demons.

"I have learned so much about myself. I have re-discovered that little boy who had the hunger to create, which I think I had lost. I am alive," he said then.

He told Vanity Fair that he had had no recollection of making the anti-Semitic comments and that "when I saw it (on video), I threw up."

Drug - Food Interactions Selfie Addiction Calculator How to Reduce School Bag Weight - Simple Tips Loram (2 mg) (Lorazepam) Daily Calorie Requirements Post-Nasal Drip A-Z Drug Brands in India Diaphragmatic Hernia Sinopril (2mg) (Lacidipine) The Essence of Yoga
This site uses cookies to deliver our services. By using our site, you acknowledge that you have read and understand our Cookie Policy, Privacy Policy, and our Terms of Use